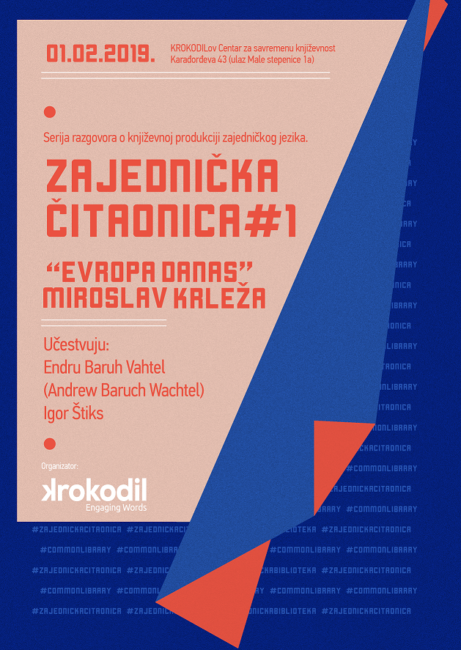 The COMMON LIBRARY program was conceived as a further continuation of the LANGUAGES AND NATIONALISMS project, which dealt with the important question of language misuse for political purposes in the region of the former Yugoslavia and ended with the development of the DECLARATION ON THE COMMON LANGUAGE. The idea behind the COMMON LIBRARY program, however, takes into consideration literary genres rather than linguistic science in order to find the best means to apply pressure on political authorities in Bosnia and Herzegovina, Croatia, Montenegro and Serbia and thus influence legislative change when it comes to the recognition of the fact that the 4 “political languages” spoken in the region are actually nothing but equal variants of the same yet unnamed polycentric language. This legislative recognition would effectively bring an end to educational, cultural and consequently, political segregation in the region based on the false premise of identity politics that claims each nation/ethnic group has the right (or even obligation) to its own  language, an idea that disregards  the integrative linguistic reality, or even plain common sense.

The aim of the COMMON LIBRARY program is to create space for writers and thinkers from the four countries of the region to express and confront their views on the subject through a series of debates. The wider  public is also included in this open language debate, in order to reach new conclusions and to offer proposals on some of the most important linguistic, literary and cultural questions. The COMMON LIBRARY program so far has produced six different publications.

This project is supported by the CCFD-Terre Solidaire. The June edition of the debate was realized under the umbrella of the CSO activism for regional  reconciliation in the former Yugoslavia project – In Support of RECOM, supported by the European Union.

The first event within Common Library served as an opening debate and presentation of the project. Vladimir Arsenijević and Igor Štiks, the editors of the project, discussed the seminal essay of Miroslav Krleža, defining and redefining the notion of Europe from 1935 until today. 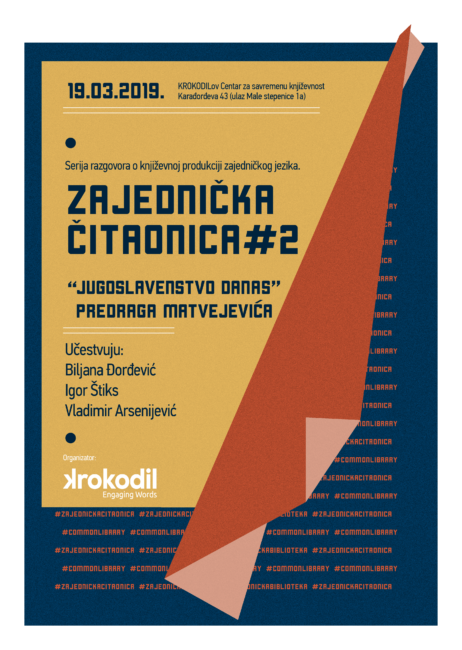 On March 19th 2019, KROKODIL’s Centre for Contemporary Literature hosted a discussion by  Biljana Đorđević, Igor Štiks on Predrag Matvejević’s 1982 essay: Jugoslavenstvo danas, The second event dealt with the issues  of Yugoslav identity in the past, present and future, Yugoslavia and post-Yugo sphere, and socialism and post-socialism. The participants were Biljana Đorđević, a  professor at the Faculty of Political Sciences in Belgrade, and Igor Štiks.

This event centered  on  the essay by  the famous Yugoslav writer Danilo Kiš, and on  the exoticism and terror of identities when it comes to literature from the Balkans. The essay was discussed and analyzed by Katarina Luketić, a literary critic and essayist from Zagreb, Croatia, and Adriana Zaharijević, a feminist theorist and professor from Belgrade.

On May 21st, KROKODIL’s Centre for Contemporary Literature hosted a discussion by Bojan Krivokapić and Filip David on Daša Drndić’s essay: Iz vile na Wannseeu (From the villa on Wansee),

The topic of the debate was anti-fascism, based on the essay by one of the most renowned  writers from Croatia, Daša Drndić. Drndić’s primary  areas of interest in literature and in life were fascism, Nazism and the role and responsibility of the  “ordinary man” in them The participants were the young poet and writer from Novi Sad, Bojan Krivokapić, and the dramatist, writer and lifelong political activist from Belgrade, Filip David.

The participants discussed the possibility of common literature, and what it would convey. The main point of discussion  was whether this inclusive literature would include only writers writing in the variants of “our” language, or would it also include the writers originating from this language, who due to their life circumstances, are writing in other foreign languages. Joint presentations at major international book fairs were also discussed and various positive examples were mentioned such as the “4 Countries/1 Language” presentation of the literature of German speaking countries, among others.

The sixth Common Library event was held on Thursday, September 26th 2019 at the KROKODIL Center for Contemporary Literature and was centered on the text written by the late sociologist and feminist Žarana Papić titled  “Former Masculinity and Femininity of Former Citizens of the Former Yugoslavia.”Ana Pejović talked with Jasmina Tešanović and Katalin Ladik about “womens’ issues” in the region of the former Yugoslavia then and now. Performances of Spring Cleaning by Katalin Ladik and Transgender Jesus were also held during the event, which  Jasmina Tešanović prepared and performed together with musician Katie Woznicki. 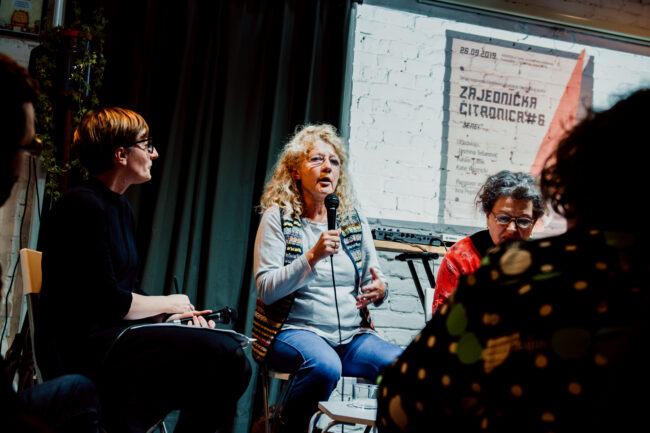 The seventh Common Library event was held on Friday October 25th 2019 at the KROKODIL Center for Contemporary Literature. It centered on  a  selection of texts chosen from Borka Pavićević ‘s 1994 essay collection  “Fashion,” . Danilo Lučić, the editor of the “Common Library” imprint, talked with the philosopher Boris Buden, who came to Belgrade from Berlin for this occasion . The main topic was the culture of resistance in the Yugosphere, then and now, which in a remarkable way permeates both the writing and activism of Borka Pavićević.

This was the first edition of the Common Library in which we introduced the element of stage adaptations of the selected text in cooperation with the DAH Theater. They were performed  by the actress Ivana Milenović Popović. At the same time, we promoted the second booklet of the “Common Library” imprint, entitled “Europe,” which features  chosen essays written by Miroslav Krleža (Europe Today) and Igor Štiks (Letter to Europe).

The eighth Common Library event was held on Wednesday, December 18th 2019 at the KROKODIL Center for Contemporary Literature. Igor Štiks discussed  Dubravka Ugrešić’s  essay “Writer in Exile” , with two writers with extensive personal experience and knowledge of living in exile, Semezdin Mehmedinović and Lana Bastašić, both originally from Bosnia and Herzegovina. They talked about the eternal theme of exile, what it used to mean before and what it means today, and how our understanding of exile changes over time. In addition to Semezdin Mehmedinović and Lana Bastašić, Dubravka Ugrešić herself joined the conversation via Skype.

At  this Common Library event, we continued with stage adaptations of selected texts in cooperation with the DAH Theater. Based on the idea of Diana Milošević and Ivana Milenović Popović, and with music composed by Ljubica Damčević, Dubravka Ugrešić’s essay “Writer in Exile” was performed  by Ivana Milenović Popović.

At the same time, we promoted the third booklet in KROKODIL’s “Common Library” imprint, “Identities,” which features essays written by Danilo Kiš (“Homo Poeticus, Despite Everything”) and Lana Bastašić (“Looking for a Coat”).