– THE POSSIBILITY OF EUROPE – 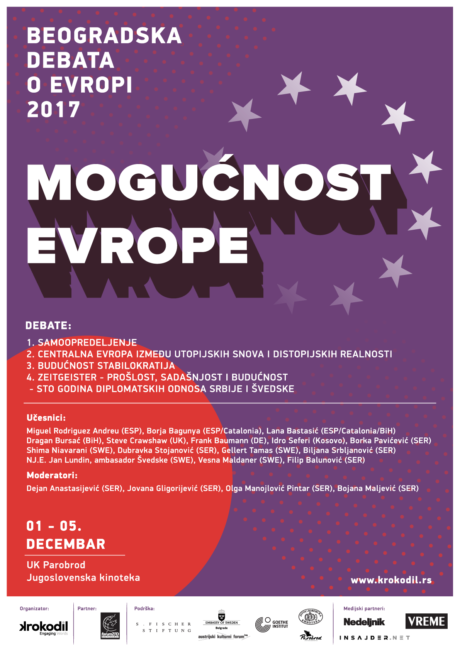 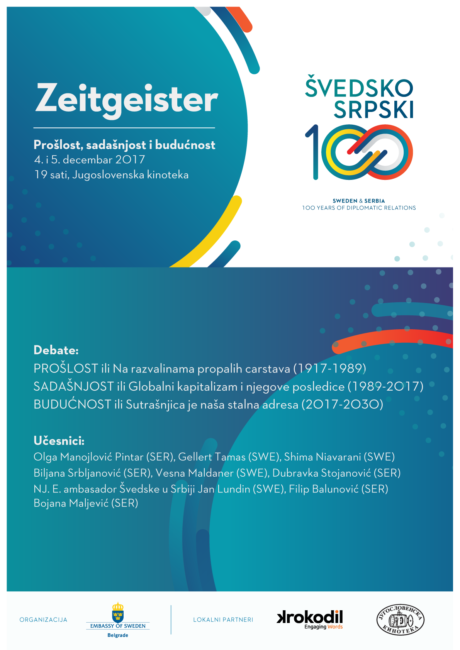 The following two days of the program (Monday 4th and Tuesday 5th December 2017, Jugoslovenska kinoteka),  ZEITGEISTER (ger. Spirits of the time),  were dedicated to the celebration of 100 years of diplomatic relations between Serbia and Sweden. The discussion was held in three debate rounds: PAST, or: On the ruins of fallen empires (1917-1989), PRESENT, or: Global capitalism and the consequences (1989-2017) and FUTURE, or: Tomorrow is our permanent address (2017-2030), which were moderated by Olga Manojlović Pintar and Bojana Maljević. Through these three rounds of debate, it was our intention to interrogate the similarities and differences that exist between these two societies, and to shed light on various aspects of past, present and future through the deconstruction and deep analysis of political, economic, cultural and historical connections between these two countries. In a dynamic series of discussions, by rethinking some of the most pressing questions of the present day, vital both for Sweden and for Serbia, the stage was set for our renowned guests: Shima Niavarani, Dubravka Stojanović, Gellert Tamas, Biljana Srbljanović, H.E. Jan Lundin, the ambassador of Sweden, Vesna Maldaner and Filip Balunović.

ZEITGEISTER is one event in the series of events that Swedish embassy is organizing within the framework Švedskosrpski 100, in cooperation with Association KROKODIL, Creative mentorship, KC Grad and Jugoslovenska kinoteka. The aim of the program Švedskosrpski 100 is shedding light to teh subjects we recognize anyway, but also the deepening of understanding between the two countries thoriugh the dialogue and debate, which is the skill that the Swedish are extremely proud of.

Detailed info about the program:

THE POSSIBILITY OF EUROPE

THE POSSIBILITY OF EUROPE, first evening

For a long time, we have been painfully aware of the growing gap between central European “civilized” self-awareness and the rather terrifying statistics related to xenophobia, racism, religious and ethnic distrust, and open hatred towards the Other and those who are different from us, those gentle phenomena that are present in virtually all countries in the Central European zone, from Austria to Ukraine.

With the help of two distinguished participants in the first debate round at this year’s Belgrade Debate on Europe (Frank Baumann, the director of the Belgrade Goethe Institute and Borka Pavićević, the director of the CZKD), and with the moderation of the journalist of Belgrade weekly Vreme, Jovana Gligorijevic, we will host a discussion about the relationship that exists between the specifically Central European self-confidence, and both the social and political conservatism that have caused a sharp political turn to the right of most areas of the so-called Mittel-Europe.

The countries on the outskirts  of Europe,  in the southeast and east of the European continent, are characterized by a combination of weak democratic systems and strong, authoritarian leaders of mainly right-wing political provenance. This situation has provoked the Austrian political scientist, Professor Florian Bieber, to create a neologism: stabilocracy. Why is this unusual term so understandable today? Is there any consolation in the fact that modern Serbia in this sense, with the almost limitless power of the President and his Party, is just a part of the general rule, and not the unusual or even morbid exception – which was the situation it was accustomed to during the 1990s?

However, who is really responsible for the emergence of a stabilocracy? Is this just a reflection of the traditional aspirations of the marginal European societies and the voting majority in them, craving a “strong hand”? Or somebody from somewhere creating specific situations in these small, not too interesting but potentially, or even proverbially problematic societies, conditions that favor the need for easy control of stability. Why is all this happening? Does the stabilocracy has a bright future? We heard from from Steve Crawshaw, former BBC and Independent daily newspaper editor, and today, director of Amnesty International, and Dragan Bursać, a journalist at Banja Luka’s Buka and columnist for Al Jazeera, with the help of moderator Dejan Anastasijević.

THE POSSIBILITY OF EUROPE, second evening

Due to the Spanish-Catalan crisis, self-determination is presumably the hottest word in the European political language currently, and the question of who (or the combination of questions: Who?, Under what conditions?, and Why?) achieves the right to self-determination is one of the most complex riddles. A one-sided answer is almost impossible to give. In order to properly consider all the nuances that this problem carries in ourselves, we decided to divide the debate concerning self-determination into two distinct parts. In the first part we, along with the help of the moderators Jovana Gligorijevic and Dejan Anastasijevic, and the participation of guests from Spain and / or Catalonia, Miguel Rodriguez Andreu, editor of the Balkania magazine and resident of Belgrade for ten years now , Borya Bagunya, a Catalan writer, and Lana Bastasic, a Bosnian-Catalan writer, discussed the reasons for Catalan aspiration for independence from Spain and the justifications for it, regardless of the possible consequences in the European field that the unilateral secession of Catalonia would certainly cause.

In the second part of the discussion, we discussed the same issue with guests from Kosovo, Bosnia and Herzegovina and the United Kingdom – Kosovo journalist Idro Seferi, Bosnian journalist Dragan Bursać and Steve Crawshaw of Amnesty International.

CONFERENCE ZEITGEISTER – Past, present and future

After the historical overview of the relations between our two nations, the discussion tackled different dynamics of the development of the two countries in the period between the two world wars, after the early “globalism” of big empires had been replaced with the process of national emancipation. This process was particularly turbulent in the central, eastern and south-eastern regions of Europe, where several new European states had been formed upon the ruins of fallen empires (thus our subtitle), among them the first Yugoslav state union – the Kingdom of Serbs, Croats and Slovenes. However, the common European history was also in special focus. We must also remember that the socialist era established in Yugoslavia after the Second World War coincided with enormous success of the so-called Swedish model. What are the similarities and differences between the Swedish Social Democracy and welfare state and the specific Yugoslav brand of a socialist, self-managed and non-aligned state? How deep was the influence of the socialist period on the Yugoslav and Serbian mentality and how did Social Democracy shape the opinion of average Swedes? How much of these innovative political and economical concepts have remained in place until today? We ended this debate with the fall of the Berlin Wall and the beginning of a new era for all Europeans.

THE PRESENT or Global Capitalism and Consequences (1989-2017)

One of the consequences of the fall of the Berlin Wall was the unsettling and sobering knowledge that the majority of people in the newly liberated nations of Central and Eastern Europe did not at all crave democracy, human rights or extended personal freedoms but rather the eroticism of a Western-style consumer society that previously they could only enviously observe from the distance and over the fence. Almost thirty years after this seminal event, both the idea of the European Union and the dominant liberal-capitalist system are rapidly losing support almost everywhere, while the nationalist, anti-immigrant and xenophobic right wing is on the rise. It seems that the prevalent idealism and optimism of the first years of a newly united Europe transformed into something that today we still do not understand as best as we should.  Why and when exactly did things turn in the wrong direction? Could the crisis in which we have been living for many years have been avoided? And what is (or could be) the role of the countries from European peripheries in this process?

Thanks to the rapid development of the electronic and telecommunications industries, as well as global popular culture in the last few decades, cheap ways of travel and the firm establishment of English as the global language, a new generation has been created globally whose members are able to understand each other much better than any generation that preceded them. Although the question remains, are young people willing to use that to their advantage? Is it a sufficient guarantee for a more promising future? “We understand each other, so what?”, young people would most probably say. That is the reason why they are the most obliged to offer replies to these questions. Therefore, in the first part of our two part third debate circle, we first asked the youngest conference participants, Shima Niavarani and Filip Balunović, to discuss, with the help of our two moderators, their own visions, hopes and fears about the world that we all share, for better or for worse. In the second part of the debate we invited other conference participants to join them on-stage and share their perceptions and predictions that concern the future of not only Sweden and Serbia, but also the European continent as the whole and even the planet Earth.

The first Belgrade Debate on Europe, called, “What We Talk About When We Talk About Europe” was held in December 2014 in Belgrade, as an integral part of a series of debates on Europe organized by the German Academy of Language and Literature, in cooperation with two Berlin-based organizations – Allianz Kulturstiftung and S The Fischer Stiftung, together with the Cultural and Media Commissioner of the Federal Republic of Germany and the Goethe-Institut from Belgrade.

The great success of the Belgrade Debate on Europe in 2014, as well as the continuation of the European crisis that followed, led to the marking of the “Belgrade Debate on Europe” as one of the Association KROKODIL’s annual programs, as an event that offers a platform for regular gatherings of intellectuals from all over the European continent in order to open discussion on and articulate the burning issues of the European past, the present and the future.

This year’s Belgrade Debate on Europe was made possible by: forumZFD, S. Fischer Stiftung, Austrian Cultural Forum, Goethe-institut Beograd, The embassy of Sweden in Belgrade, UK Parobrod and Jugoslovenska kinoteka.