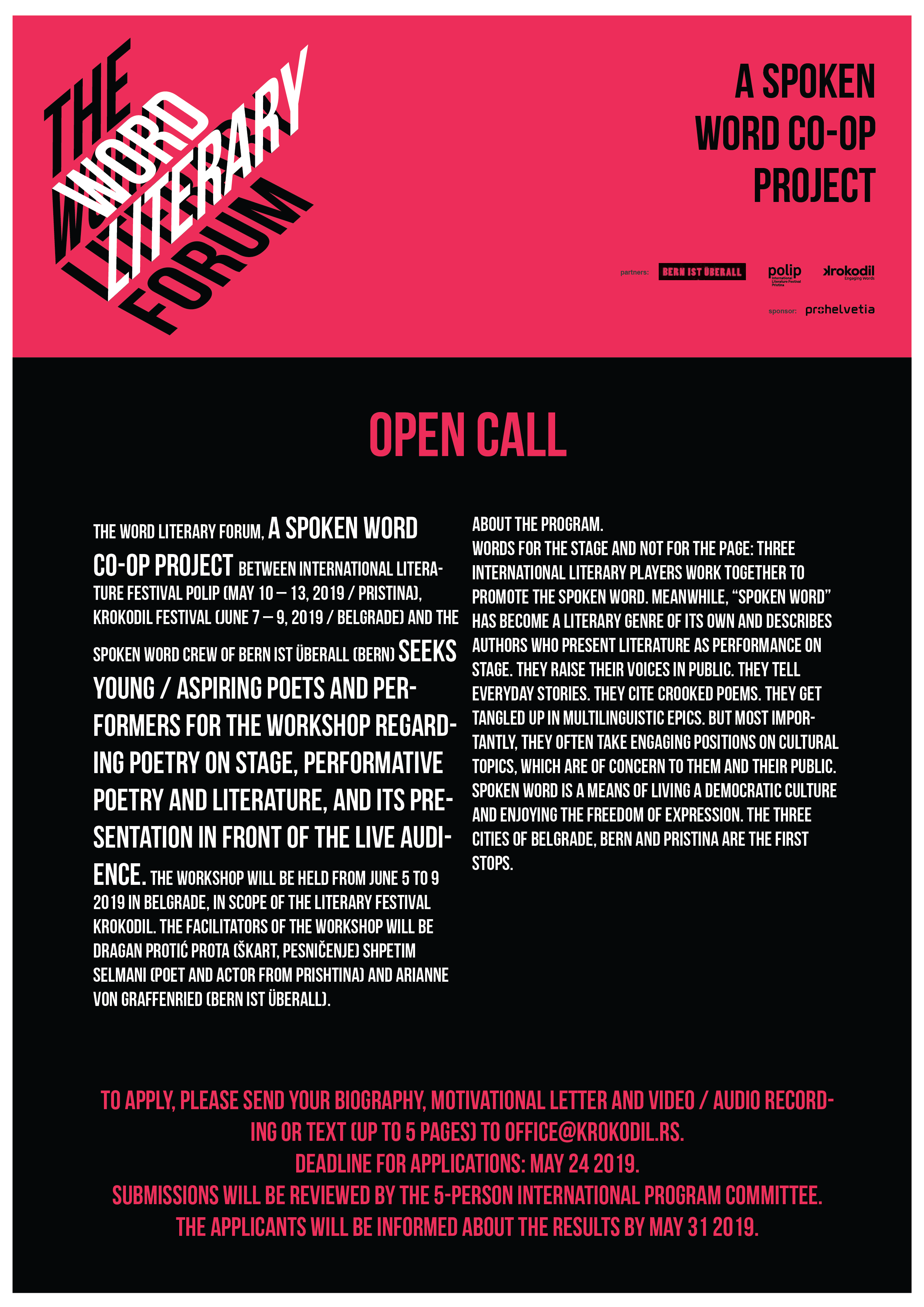 The WORD LITERARY FORUM, a Spoken Word Co-op Project between International Literature Festival POLIP (May 10 – 13, 2019 / Pristina), KROKODIL Festival (June 7 – 9, 2019 / Belgrade) and the Spoken Word Crew of Bern ist überall (Bern) seeks young / aspiring poets and performers for the workshop regarding poetry on stage, performative poetry and literature, and its presentation in front of the live audience. The workshop will be held from June 5 to 9 2019 in Belgrade, in scope of the literary festival Krokodil. The facilitators of the workshop will be Dragan Protić Prota (Škart, Pesničenje) Shpetim Selmani (poet and actor from Prishtina) and Arianne von Graffenried (Bern ist überall).

About the program. Words for the stage and not for the page: three international literary players work together to promote the spoken word. Meanwhile, “Spoken Word” has become a literary genre of its own and describes authors who present literature as performance on stage. They raise their voices in public. They tell everyday stories. They cite crooked poems. They get tangled up in multilinguistic epics. But most importantly, they often take engaging positions on cultural topics, which are of concern to them and their public. Spoken word is a means of living a democratic culture and enjoying the freedom of expression. The three cities of Belgrade, Bern and Pristina are the first stops.

To apply, please send your biography, motivational letter and video / audio recording or text (up to 5 pages) to office@krokodil.rs. Deadline for applications: May 24 2019.

Submissions will be reviewed by the 5-person International Program Committee. The applicants will be informed about the results by May 31 2019.

Biographies of the facilitators:

Ariane von Graffenried is an author with a doctorate in theatre studies and writes texts for the stage, radio, and newspapers as well as scientific texts. She is a member of the awardwinning writers’ collective «Bern ist überall». Since 2005, she has performed as a spoken word artist with musician Robert Aeberhard as the duo «Fitzgerald & Rimini». Her most

recent published work is the book «Babylon Park» (2017). In her spoken texts, Ariane von Graffenried switches playfully from Swiss dialects to High German, from French to English. She crosses language borders and geographical dividing lines and mixes aesthetics with social criticism, the fantastic with the factual, the laughable with the questionable. For many years she’s been working at the interface between literature, music and performance. In close collaboration with the musician Robert Aeberhard («Fitzgerald & Rimini»), some of her texts became spoken songs. A selection of her texts published in «Babylon Park» have been presented at international festivals, translated by Anne Posten and Peter J. Betts and performed by «Fitzgerald &Rimini».

Shpëtim Selmani was born on 1986 in Pristina. Has obtained a degree from the University of Pristina – Faculty of Arts in Acting. Beside writing poetry and novels he also plays regularly in theatre performances. His last book is, “Poetry in the times of Blood and Desperation 2010 – 2017”. Shpetim writes continuously for the alternative blog S’bunker. He’s also a dreamer that doesn’t seem to be needed by anyone. by «Fitzgerald & Rimini».

ŠKART performed, workshopped, exhibited and lectured in Europe, America and Asia. In 2011 the group participated in Venice Bienial of Architecture with SEE-SAW / PLAY-GROW (polygon of dis-balance, inspired by Metropolis-Poem by Vasko Popa). www.skart.rs