Who started all this? Historians against revisionism 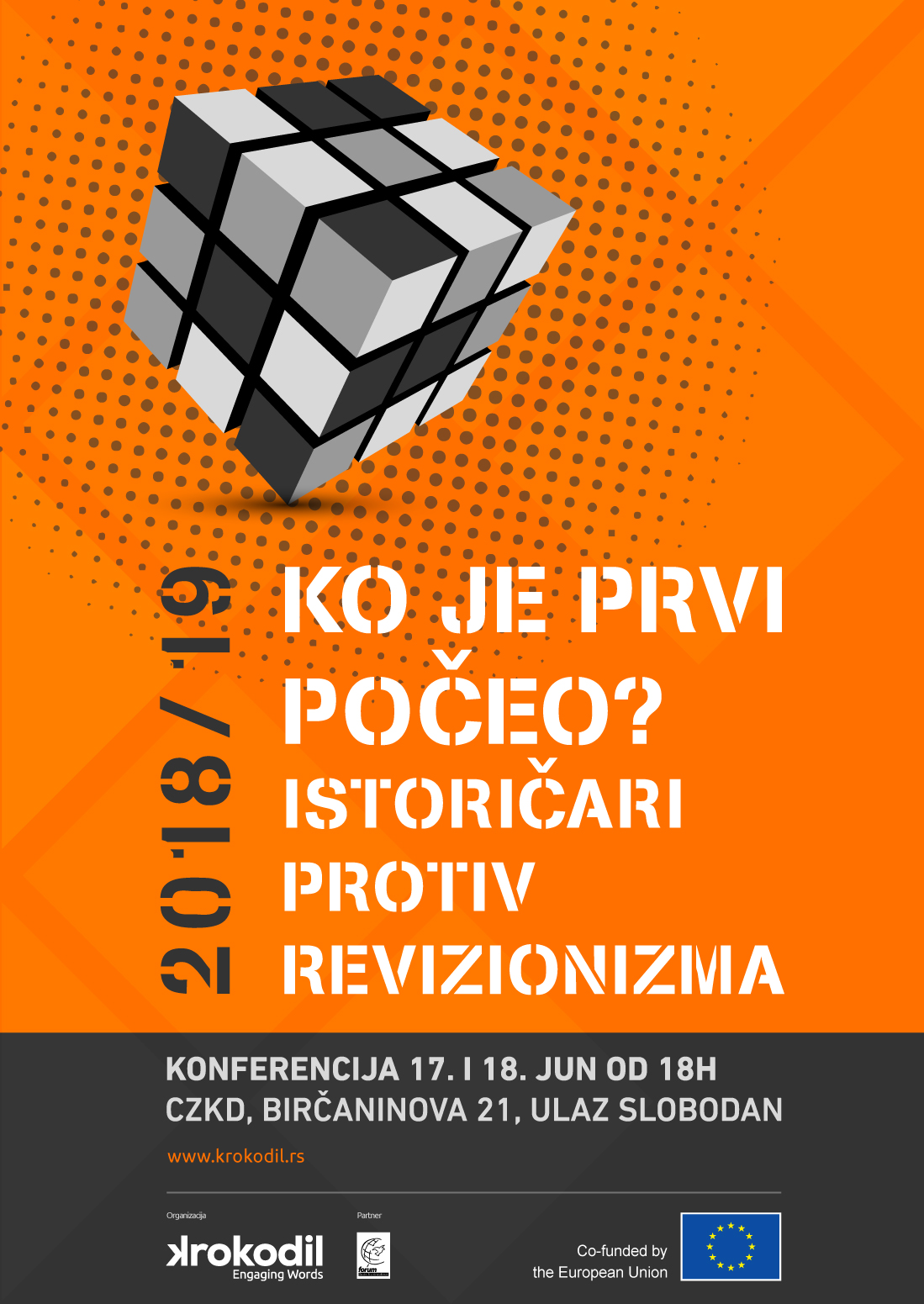 20 Jun Who started all this? Historians against revisionism

CONFERENCE “WHO STARTED ALL THIS? – HISTORIANS AGAINST REVISIONISM”

Debate/Panel Session #1: OUR FIRST (AND ONLY) SHARED CENTURY – 100 Years since the Birth of Yugoslavia

Debate/Panel Session #3: LONG LIVE DEFEAT – Change of Paradigm in the Narrative of the II World War

Debate/Panel Session #4: US AND/OR THEM – Tragic Inheritance of the Wars of the 1990’s

+ steering group members on the project Who started all this? Historians vs. Revisionism:

Following the Languages and Nationalisms project, which tackled the uneasy reality of the existence of four political languages in the region where actually one and only (albeit unnamed) common language is spoken, as well as its major outcome − the Declaration on the Common Language, crafted by 30 linguists and other experts and signed by ca. 10,000 people from all over the region of the Western Balkans − Association KROKODIL has launched a new project entitled Who Started all This? – Historians against Revisionism. Project will start with big conference in Belgrade during the 10th festival KROKODIL on Sunday 17th and Monday 18th June at Center for Cultural Decontamination.

The main goal of this project is to create a space for historical and intercultural dialogue by creating a network of historians, writers, journalists, students and wider public which would eventually contribute to the conflict resolution, mutually respected historical narratives (if shared are not possible) and to more inclusive culture of remembrance. The project’s activities will result in the creation of a sustainable platform that would allow mutually acceptable interpretation of events of the recent and more distant past through the method of multi-perspective historical narrative.

While the project is executed by the Association KROKODIL, the overall activities are being monitored by the Steering Group which consists of some of the most prominent historians from the Western Balkans and the ex-Yugoslav countries: Prof. Dubravka Stojanović, PhD from Belgrade,  Serbia, Prof. Tvrtko Jakovina, PhD from Zagreb, Croatia, Prof. Božo Repe, PhD from Ljubljana, Slovenia, Prof. Husnija Kamberović, PhD from Sarajevo, Bosnia and Herzegovina and Milivoj Bešlin, PhD from Novi Sad, Serbia. The Steering Group is conceived as the body of experts that oversees a number of activities that will be implemented throughout the duration of the project.

The first step through which this network of historians fostering a multi-historical narrative on the past of this region will be accomplished is the conference entitled Historians Against Revisionism. Taking place in Belgrade, it will gather a number of historians from all the Western Balkans countries. The first conference will pave the way towards successful future activities of this project and it will set up the methodology of research, identify neuralgic points in history of Serbia, Croatia and other countries of the region and agree on the new multi-perspective narrative of region’s history. The conference will be open to public and the audience will have an opportunity to contribute to the discussion. The second conference of the same name will take place in the end of the year in Novi Sad.

The conference will be followed by residential stays of historians from the region in Association KROKODIL’s residence-for-writers in Belgrade. Six historians will be provided with a two-week long residential program during which they will be able to conduct research, having in mind that the documents on Yugoslav history are kept exclusively in Archives of Yugoslavia and Archives of the Foreign Ministry, both in Belgrade. This residential program has its roots in the years long “Association KROKODIL’s Writer-in-Residence program”.

The role of three summer schools/ student conferences is to introduce the students with the method of multi-perspective historical narrative. Twenty participants (students) will prepare in advance their reports on relevant subjects previously determined during the Historians Against Revisionism conferences. Their activities in the summer schools will be monitored by two professors who had already participated in the previous activities of the project (Conference or Residential stays). The focus of the students’ work with their peer-to-peer lecturers shall be neuralgic points of the history of the Yugoslav state.

Apart from introducing historians, students and wider public to the concept of the multi-perspective historical narrative, one of the goals of the project is for the program in general to get licenced as it will then benefit teachers and professors on one hand as well as the Ministry of Education on another. The introduction of the idea of the multi-perspective historical narrative into the official educational system will be facilitated by four workshops for teachers and professors of history and Serbian language and literature. These workshops will be dedicated to all major points of history explored at the conferences. Central topic of workshops will be “How to Teach Sensitive Topics and Implement Multi-perspective Methodology”. In partnership with European Association of History Educators (Euroclio), these workshops will be organised for multi-ethnic communities of Subotica, Novi Pazar and Vranje (covering Preševo and Bujanovac), as well as in Belgrade.

Finally, the public in all countries of the region will be constantly updated with the activities of the program giving the opportunity for those who are interested to join the cause and support the initiative. One-day final conference entitled “Yugo-futurism”, with participants of student summer schools/conferences as formal organizers, will engage all other participants on the project, state representatives, guests from the EU, representatives of the EU and the media. This conference will represent a continuation of the previous project on joint regional textbooks, but will focus on presenting the results achieved during the course of this project – participants of conferences, summer schools and workshops will present what they have achieved and initiate a debate on possibilities of constructing a multi-perspective narrative that would open further discussions on the past instead of closing them into imposed, one-dimensional national “truths”.

The collapse of socialist Yugoslavia triggered a new wave of interpretations of the past in the region of the Western Balkans. The past has been changed numerous times in this region for various purposes but mostly for legitimization of national and state identities. This is not an exclusive phenomenon of the Western Balkans; however, different and opposing “histories” and their relations with political and social dynamics in this region regularly obstruct reconciliation and normalization of relations between the neighboring countries and societies and hinder the creation of inclusive historical narratives. Through the process of historical cleansing, temporary victors (those who “write” the history) have been constructing the past using a wide array of public and political interventions – from educational system to symbolic expressions of new histories (names of the streets, holidays, monuments and memorials). Questions such as “Who came the first to this territory”, “Who is the biggest victim?” and, last but not the least, “Who started all this?” symbolize the type of collective memory that is characterized by two crucial identities’ markers constantly interplaying with the construction of remembrance – Self-victimization and Heroism.

The disintegration of former Yugoslavia and the wars of the 1990s were initiated by the ideology that has its roots in self-victimization narratives and the strong division between “Us” (the Good ones) and “Them” (the Bad ones). This division is both the cause and the consequence of these wars. Ethno-centralized narratives and remembrances constructed during and after the wars have been accompanied by strong revisionism of those events in the past that could harm the dominant official narratives. The very nature of the socialist Yugoslav state, the fact that it was created during the Second World War and that in it ethnic and national identities did not serve as the base of the state’s legitimacy, created the ideal object of historical revisionism in the post-Yugoslav countries. Yugoslavia is nowadays being used for the clash with the “Enemy” in the construction of this specific “Us and Them” dialectic. This is the context in which the current historical revisionism takes place.

Apart from being an obstacle for reconciliation and normalization of relations between the post-Yugoslav countries and societies, historical revisionism in the Western Balkans is also contrary to participative and tolerant culture of remembrance as one of the founding principles and values of the European Union.

This 30 month long project is supported by the European Union. In addition, the project is implemented in close co-operation with forumZFD Serbia.