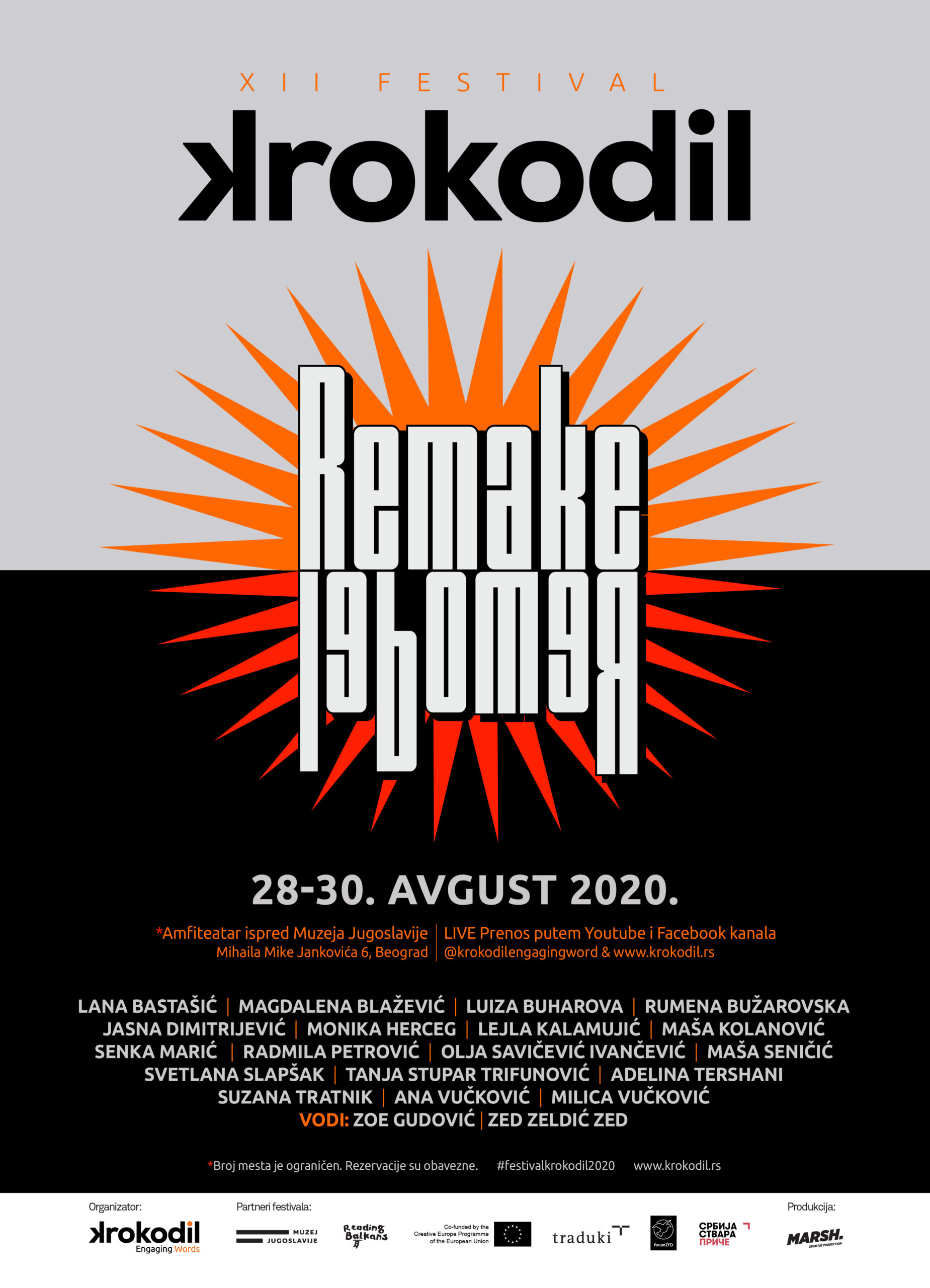 Evening program
August 28, 29 and 30 from 8 p.m. at the open-air arena in front of the Museum of Yugoslavia,
Mihaila Mike Jankovića 6, Belgrade.
Free entry. Number of seats limited. Reservation required.

The literary festival KROKODIL will be held for the twelfth time on Friday, Saturday and Sunday, August 28, 29 and 30. The symbolic title Remake / Remodel was chosen in order to reflect the age of “the New Normal” that we have all been living in for quite some time now. This is why we decided to adopt the name of the famous song by Roxy Music from 1972 but also to refresh it and endow it with a completely new and different meaning. In a world permanently scarred by the Covid-19 pandemic that will never again be as it was, it is essential to come up with new, fresh narratives and also new, fresh voices able to convincingly interpret this previously unknown kind of reality.

In order to accomplish exactly that, the twelfth edition of the literary festival KROKODIL proudly presents a top-of-the-line selection of participants consisting of twenty prominent regional female poets and prose writers. This is done in recognition of the fact that for several years now women writers have been bringing steady influx of much needed changes to the local and regional literary scenes, most of all in terms of sensibility.

This XII edition of the literary festival KROKODIL consists of public readings, sofa interviews, online conversations and video projections and takes place in the beautiful open air arena in front of the Museum of Yugoslavia.

On the first night of the festival, Friday, August 28 from 8 p.m., the following authors from Serbia and the region shall be presented live: Lana Bastašić, Lejla Kalamujić, Radmila Petrović, Adelina Tërshani, Ana Vučković and Milica Vučković while Maša Kolanović, Suzana Tratnik and Olja Savičević Ivančević will be joining us via video link.

The program will be hosted by Zoe Gudović / Zed Zeldić Zed.

Belgrade Debate on Europe 2020 entitled “The Possibility of Europe 2.0” will be held as the third and last evening of the KROKODIL literary festival on Sunday, August 30, starting at 8pm at the open air arena in front of the Museum of Yugoslavia in Belgrade. It will gather together some of the most eminent European and regional intellectuals and experts from various fields (artists, writers, cultural workers, professionals and theoreticians, sociologists, historians, philosophers, activists etc.) In the framework of three distinct debate cycles we will deal with some of the most important questions that both Europe and the Europeans are facing today. The main underlying topic of the Fourth Belgrade Debate on Europe will be the COVID-19 pandemic and its’ global and more particularly European implications.

The debate cycles of this years’ Belgrade Debate on Europe are:

Various debates will be an integral part of the literary festival KROKODIL this year just like in the previous editions. They will deal with the most pressing social and political topics from a cultural viewpoint.

The debate programme will be held on Saturday, August 29 and Sunday, August 30 from 11 a.m. in front of the Museum of Yugoslavia.

On Saturday, August 29 from 11 a.m., the debate program of the literary festival KROKODIL will be opened by a debate cycle entitled Living Between Languages dedicated to discussion about the creative and artistic transition to another language. The next debate, called Conquering Freedom will initiate lively discussion on the three important recent regional initiatives: the Declaration on the Common Language, the Declaration In Defence of History and the Declaration on Regional Solidarity, together with their possible synergic effects.

On Sunday, August 30 from 11 a.m., a debate called Anti/Fascism will be held with talk about our anti-fascist heritage and the idea as well as reality of a common language of literature versus regional or even ethnic literary selections. The following debate called Solidarity is dedicated to the recent explosion that shook Beirut, killing dozens and injuring thousands, and destroying the homes of 350,000 people. We will talk of the idea and examples of global or regional solidarity and its importance beyond the complex relations between nation states and their politics.

For four years in a row, the literary festival KROKODIL has also had a humanitarian character. This year, we will raise funds to help those who are left without basic living conditions after the devastating explosion in the capital of Lebanon. Through the platform donacije.rs, we will present the humanitarian action Remake – Remodel Lebanon and invite everyone present to donate and help the victims of the catastrophic tragedy that struck Beirut.

The German Embassy is happy to support a central event of this year’s KROKODIL festival, i.e. the Belgrade debate on Europe. Since 1st of July 2020 Germany holds the Presidency of the Council of the European Union. The German EU Presidency’s programme is very much focusing on the impact of the COVID-19 pandemic and its economic and social consequences throughout Europe. The objective is to help the EU emerge from the current crisis stronger, more united and with a new sense of solidarity. This is summed up in the slogan of the Presidency – “Together for Europe’s recovery“.

The KROKODIL Festival (Literary Regional Gathering That Alleviates Boredom And Lethargy) is a literary festival that represents the entire literary scope of the region of the Western Balkans or SouthEast Euerope in a unique and original way – without generational, poetic, gender or any other exclusions. With its modern and dynamic approach to presenting writers, consisting of reading with the use of modern video and audio media, music and stage performances, with a wide selection that includes poetry, prose and plays, the KROKODIL Festival has since its founding in 2009 become one of the most visited literary events in the region. So far, eleven summer festivals and over fifteen visiting editions of our festival have been held in nine European countries, with the participation of over three hundred writers from Serbia, the region and Europe.