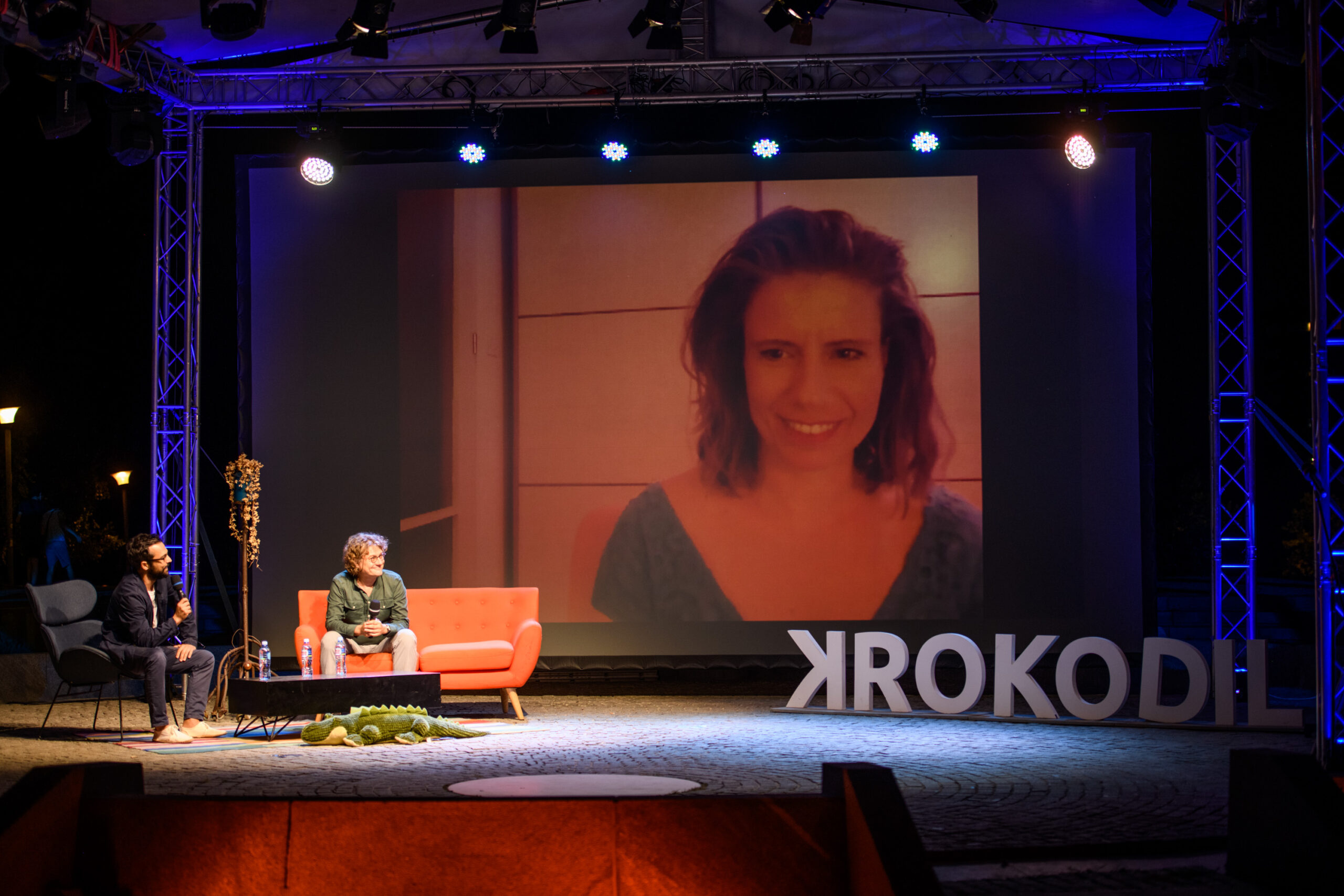 Posted at 15:53h in news by wpadmin 0 Comments
0 Likes
Share

While the first debate focused on the Balkans in the context of the European Union, the second debate focused on Central Europe itself. “There has been a lot of confusion. I am almost allergic to people who confuse Europe with the European Union. It seems that the people from the EU put a copyright on the term. But although we are not a part of the intergovernmental organization that is called the European Union, we do sit in Europe right now,” said Igor Štiks, the moderator of the second debate. His guests were Michał Kozłowski, with whom he talked on stage, and Katarina Peović, who joined the discussion online from Croatia.

The debate’s title is Between (E)Utopian dreams and Dystopian Realities. In this narrative dystopian reality would be our history from the fall of the Berlin wall – for example, Yugoslavia trying to build a  heterogeneous county and failing to preserve itself, the destruction of national identity, the wars in the 90s. Utopian dreams would be the hope of recovery and rejoining Europe in its new neo-liberal global order.

The lines between Central, Eastern, and Southeastern Europe have been blurred, but no more blurred than the lines of Europe itself. According to Michał Kozłowski, the concept of Europe first appeared in the 15th century, but it wasn’t for another 300 years in the era of romanticism that the concept of Europe and the concept of nations within Europe became dominant, giving a story of a 2000-year-old culture. “I am bitter. I am bitter because of the strong idea of the exteriorization of our malaise, sins, and the horrible things we did. The paradigmatic model “Them” was created in the 90s: the perpetrators are addressed with They, Them (e.g. Nazis, communists, etc.), there was always Them to shift the blame to – now we must face them”. According to “The Dark Side of Nation-States” by Philipp Ther, Eastern Europe can be considered a magnificent social laboratory of ethnic cleansing, and because we were not provincial, the West was learning from us. Our region is a place nationalism took its most radical and purest form. We launched ourselves into this effort in 1914 and we never got out of it. Mr. Kozłowski defined nationalism as the idea that all political organizations should concise with ethnical unity, the state’s organization should be homogenous and there should never ever be an ethnic difference between the governing and the governed. He said that when we tried to conform to the new order, we had millions of people displaced and killed within the process of democratic nation-building. We tried to, but we failed to find a formula for non-ethnic polity. We were a tiny part of the world, but we were intellectually very important. Now as Mr. Štiks puts it, Central Europe has lost its appeal. The term central Europe has lost its appeal.  It is reminiscent of the past and the Good old Habsburg days and it is rarely even used anymore by the inhabitants of the countries it refers to.

Ever since its inception in 1993, joining the European Union seemed to be a step into stability and a better future – there is a free movement policy within the EU. For the first time after imperial Rome so many people of different national, economic, and religious status, got an equal legal status. Ms. Peović, who was recently elected to the Croatian parliament, explained her country’s transition into the EU: we are deeply engaged with myths about the economy that will happen just as soon as we join the EU. Croatia was expected to follow the Hungarian model, but it was not that simple. Croatia is not doing well, she said “we have high unemployment rates, low wages, etc.” there is a political and economical asymmetry and uneven distribution between the center and the periphery Europe. Croatian economist, Branko Horvat, puts it in historical context: One of the main motives for the disintegration of Yugoslavia, and the separation of Slovenia and Croatia as the richest countries, was the belief that the developed parts of the former state will be more developed, because they will be released of the burden of financing underdeveloped regions, such as Kosovo. However, in the narrative of the EU, now Croatia plays the role of Kosovo. Mostly because there are central rules blocking the local improvement of the economy.

The rise in right-wing nationalism is threatening Europe’s neo-liberal democracy. Nationalism isn’t what is dividing us, however. Katarina says that what is dividing us is class conflict which has been transferred and transformed into the false nationalist conflict. “Nobody believes in Europe as sovereign states, its all propaganda, a PR gimmick”, Mr. Kozłowski said. “But there is something about Europe not being ethnical or monogenetic. Unlike all the other empires, Europe was born out of a double defeat and a double attempt of suicide. In the 1940s suicide was exactly what Europe achieved. “ He added: “I don’t care about Europe, Europe doesn’t interest me. I care about Humanity”. According to him the biggest threat to humanity is capitalism: “it doesn’t just threaten the working class, it threatens the entire planet. Kozłowski declares himself a Marxist (even though he may state some non-Marxist claims) and finds Marx’s description of capital very accurate. “We need to work out a new law of value.” He explained the core problem: the problem is between Us and Them, us the Marxists and them the liberals (representing capitalism), and we want to dismantle it (capitalism). Another thing that isn’t accounted for in this narrative, he says, is the rise of right-winged nationalists, because the extreme right was thought to be a phenomenon of the past that would die out on its own. But now it’s very clear that this is yet to be addressed.

“If you have a common currency, you must have a common debt” – Ms. Peović agrees with Kozłowski’s statement: In order to solve this problem, it needs to be approached in a democratic socialist way. In describing Europe 2.0, she said that there needs to be an alternative to this model of the European economy, which must overcome the problems that are directly creating the radical right. It takes time to transform the capitalist economy. The EU needs to be reformed to overcome economical differences. The first thing that needs to change is for the EU to become a shared fiscal union with a shared budgetary policy. We would also need to see the transfer of technology from developed to undeveloped countries, limit foreign import and protect domestic export of underdeveloped countries – these are some of the minimal political and economical steps needed to integrate underdeveloped countries into the EU successfully.