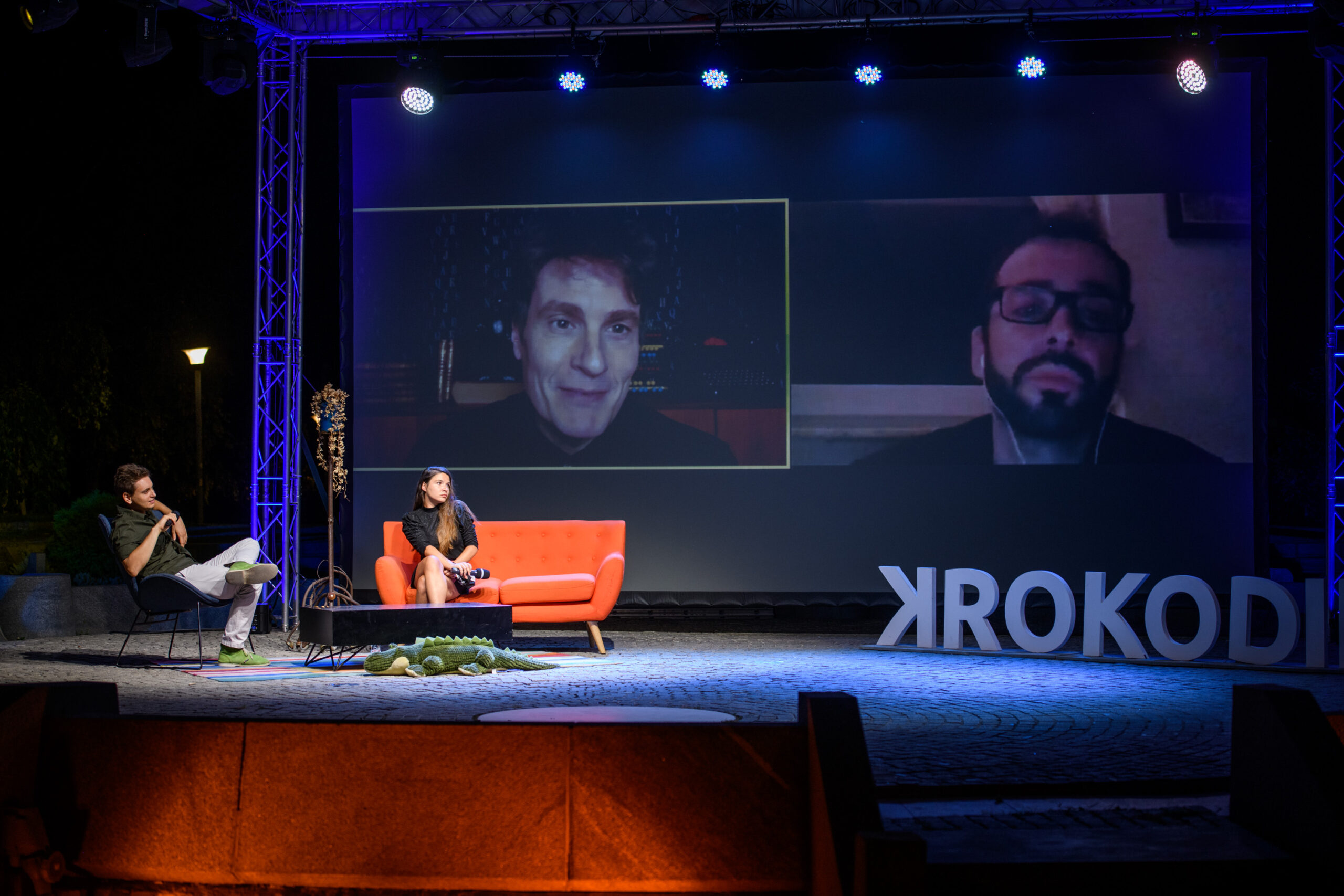 The last debate of the evening, New Normal was moderated by Uroš Krčadinac, and joining him on stage was Darija Medić. Debating with them over a video call were Miguel Roan, joining from Spain, and Olle Bergman from Sweden.

Darija Medić, explained the title of this debate “If the term “new normal” is referring not to the future, but to this moment, the question is if the new normal is something that will continue or is it just a state during a crisis. This crisis has given the world the opportunity to rethink and recalibrate in many areas” One such example, is technology. Since the pandemic started, and quarantine and self-isolation followed, the generation of data on the internet and on our devices has been immense. And so the application of AI started to be used in content moderation. By generating the data we have technological advancement that happened as a side effect: the GPT3 program for automated literature has evolved. The program was directly affected by COVID-19 because of the amount of textual content and data people generated. “In the process of naturalizing technology, we are not really aware of how fast changes happen”. However, we must try to avoid the neoliberal wow factor and the belief that science and technology can solve anything.

According to moderator Uroš Krčadinac, the world in the 21st century isn’t only connected by financial infrastructure but also by the internet. All the problems of the 21st century are global problems. Due to the COVID-19 pandemic, everybody separated in their own homes, however we are also talking about the world and our universal condition that we all share. There has been a crisis of intimacy, we are isolated in front of our computer screen. “We are doing everything in from of the computer. everything is virtual and there isn’t depth in connections.” Miguel Roan responded, “even though we are more connected on a global level, we are more alone, and we are getting more anxious because we don’t have opportunities to be in touch with other people. People should be more social than connected.”

On one hand, there are discrepancies between the lack of intimacy, but at the same time, there are new opportunities that opened up for us because of the crisis. Olle Bergman thinks we can’t really know the future: we need to do scenario thinking because the future is uncertain – are we in a post-COVID state, or is a second wave coming? He elaborated on the Swedish model with dealing with the pandemic, that was praised around the world: “they told us we must act according to recommendations and be in solidarity with our fellow Swedes. However, there has been a polarizing divide in people: some people are very careful and some people don’t care.” For him personally, the self-isolation really suited him. He was away from the urban environment, he said: “it’s a perfect situation for a writer. this quarantine and self-isolation solidified the lifestyle we were already living. Reconnecting with nature, exploring the places where you live, and deepening the connections with the people close to you.” However, he acknowledged the wider networks are suffering: “I haven’t traveled in a while, there’s this urge within me – I want to be in Belgrade, and I want to sit on that couch with you”.

He also explored what the pandemic means for the economy: “COVID-19 can take us to equalization of basic income”. The motivation of the industrialized society is changing, the motivation of educated white-collar workers is changing. Many people are on so-called downtime – they are getting paid while staying at home. The quarantine allowed them to take a step back, and ask themselves from an existential point of view – is this where I want to spend my time? People working from home for the past few months are realizing that maybe one day when all of this is over they won’t be wanting to go back to work. “The work market has changed in just six months, and ironically it has become much more globalized”, he said.

“We are learning what we can live without”, Miss Medić says. “We also see people buying land and growing their own food, there has been a need to be more independent at this time when we are overwhelmed by technological and social systems.” Another interesting trend she pointed out was that from the moment people got some free time, outside of working multiple jobs in order to survive, they started protesting. The same pattern started happening all over the world. The reason has been mostly political and economical. On the one hand, we have isolation, and on the other, we have huge crowds of people getting together all over the world. Mr. Bergman reasons that people have lost trust in the structures that keep society whole. “We have opened a door”, he says, “and what we’ve seen on the other side, this other alternative scenario, we cannot unsee.”

The world is changing very fast, and we all have existential fear installed in us.  “This crisis and the new normal that followed just intensified patterns that already existed in society. more idealistic societies will adjust better, more populist ones will suffer more; we have to address the social issues in Europe. We also need to have a moment of reflection to see where we are going”, Mr. Roan said. “We cannot return to the old normal, either because we don’t want to or it’s simply not possible”. What we need to figure out is what the next normal is, he says. “What we need to do is to fight for equality and solidarity.”