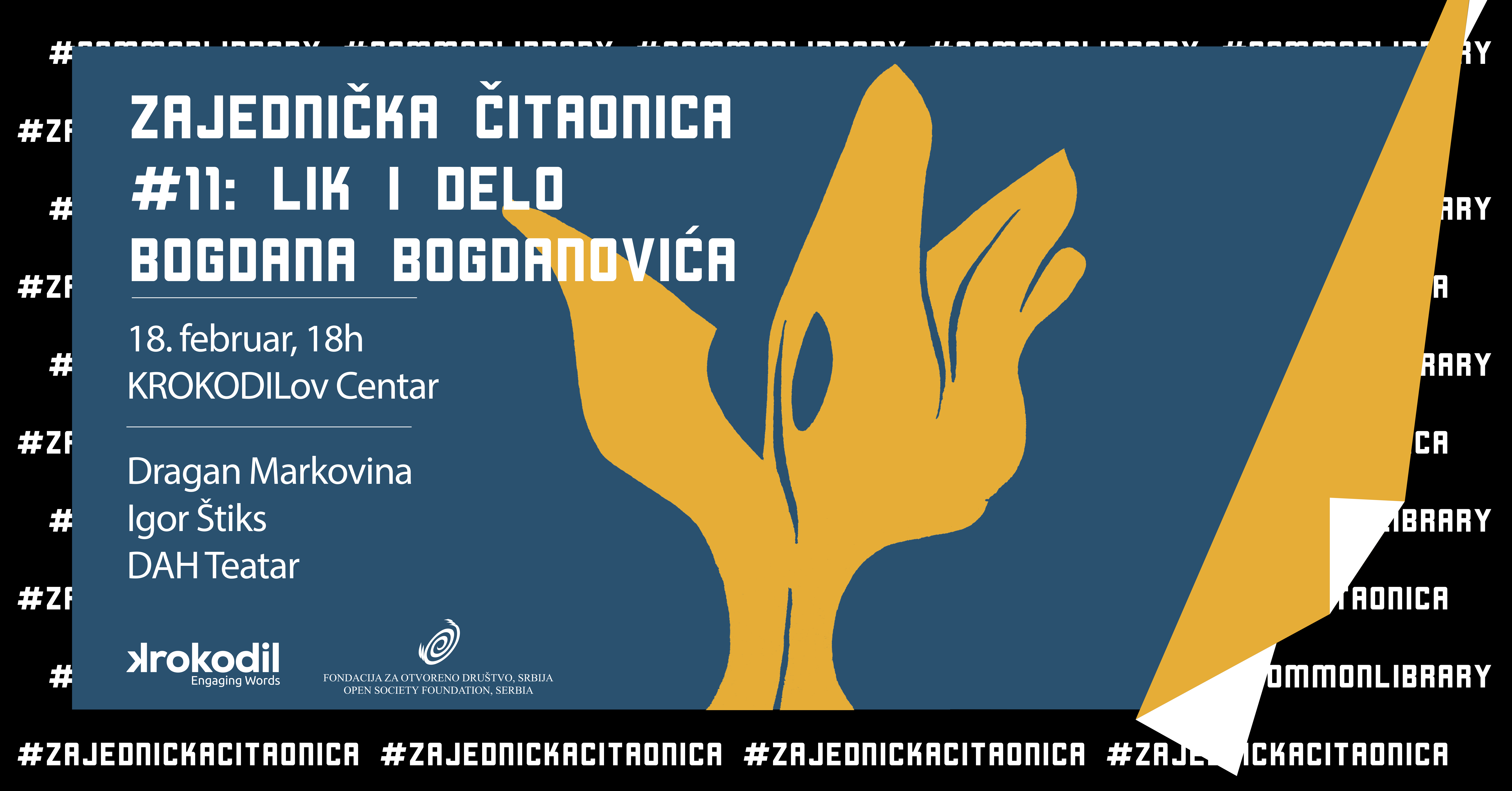 10 Feb COMMON LIBRARY #11: THE LIFE AND WORKS OF BOGDAN BOGDANOVIĆ

Posted at 13:45h in news by wpadmin 0 Comments
0 Likes
Share

Brought to you by: Igor Štiks, Dragan Markovina, Dah Theater

The number of guests is limited and reservations are mandatory via our email address office@krokodil.rs

On Tuesday, February 18th at 6 pm, another debate is awaiting you at the KROKODIL Center – a promotion of the newest edition of the Common Library series, entitled “City” which presents the essays of Bogdana Bogdanović and Dragan Markovina. On that occasion, join Igor Štiks and Dragan Markovina in a discussion about the Yugoslav monument culture, as well as the value and heritage of one of the key characters of our time – Bogdan Bogdanović.

Architect, builder, artist, philosopher, and professor, Bogdan Bogdanović is among the most significant architects of memorial architecture and monument complexes dedicated to the victims of fascism in World War II built on the territory of former SFRJ. Besides monuments in Belgrade, Jasenovac, Garavice, Prilep, Mostar and Kruševac, as well as a number of other legacies, Bogdan Bogdanović left an everlasting mark on the socio-political sphere in the Balkan region.

Bogdanović is a rare type of thinker and his works continue to live even after his death. In the essay “Čovek-Sarajevo” (Man-Sarajevo) published in 1993 and inspired by the Siege of Sarajevo, he writes about the symbolic value of cities. Almost three decades later, in the form of the essay “Čovek koji je volio gradove” (The man who loved cities) comes an answer from writer and historian Dragan Markovina.

Together, these two texts make “Grad” (City) – the seventh and newest addition to the Common Library which calls us to come face to face with the consequences of the destruction of an urban space, making life an impossible mass suffering for its citizens. The resistance of nationalism, war, and destruction as well as Bogdana Bogdanović’s architectural, monumental and literary legacy will be the topics of discussion of Igor Štiks and Dragan Markovina. Their conversation will be followed by Dah Theater’s drama interpretation performed by Ivana Milenović Popović.

We are waiting for you on February 28th at 6 pm at KROKODIL Center.

The Common library is a direct continuation of the Languages and Nationalism project, and its translation from the field of linguistic science to the field of literature.

The aim of the Common library program is raising the public’s awareness about the important topic of the misuse of languages for political purposes, in order to find the best tool to influence political authorities to make a legislative change when it comes to the recognition of the fact that the 4 “political languages” spoken in the region are actually nothing but equal variants of the same yet unnamed polycentric language.

This legislative recognition would effectively bring an end to educational, cultural, and consequently, political segregation in the region based on the false premise of identity politics that claims each nation/ethnic group has the right (or even obligation) to its own  language, an idea that disregards  the integrative linguistic reality, or even plain common sense.

The goal of the COMMON LIBRARY project is also the collection of a significant amount of literary material created in a common language in the region of former Yugoslavia, both in the past and today.

Our aim is to unambiguously build a common literary treasury in the name of one grand common language literature, opposed to forcing nationalistic selection often based on “blood” or an exclusive belonging of authors and their work. This treasury will serve as a reference point for contemporary intellectual and artistic discussions within a region encompassed by a common language.

The event was supported by the Open Society Foundation.