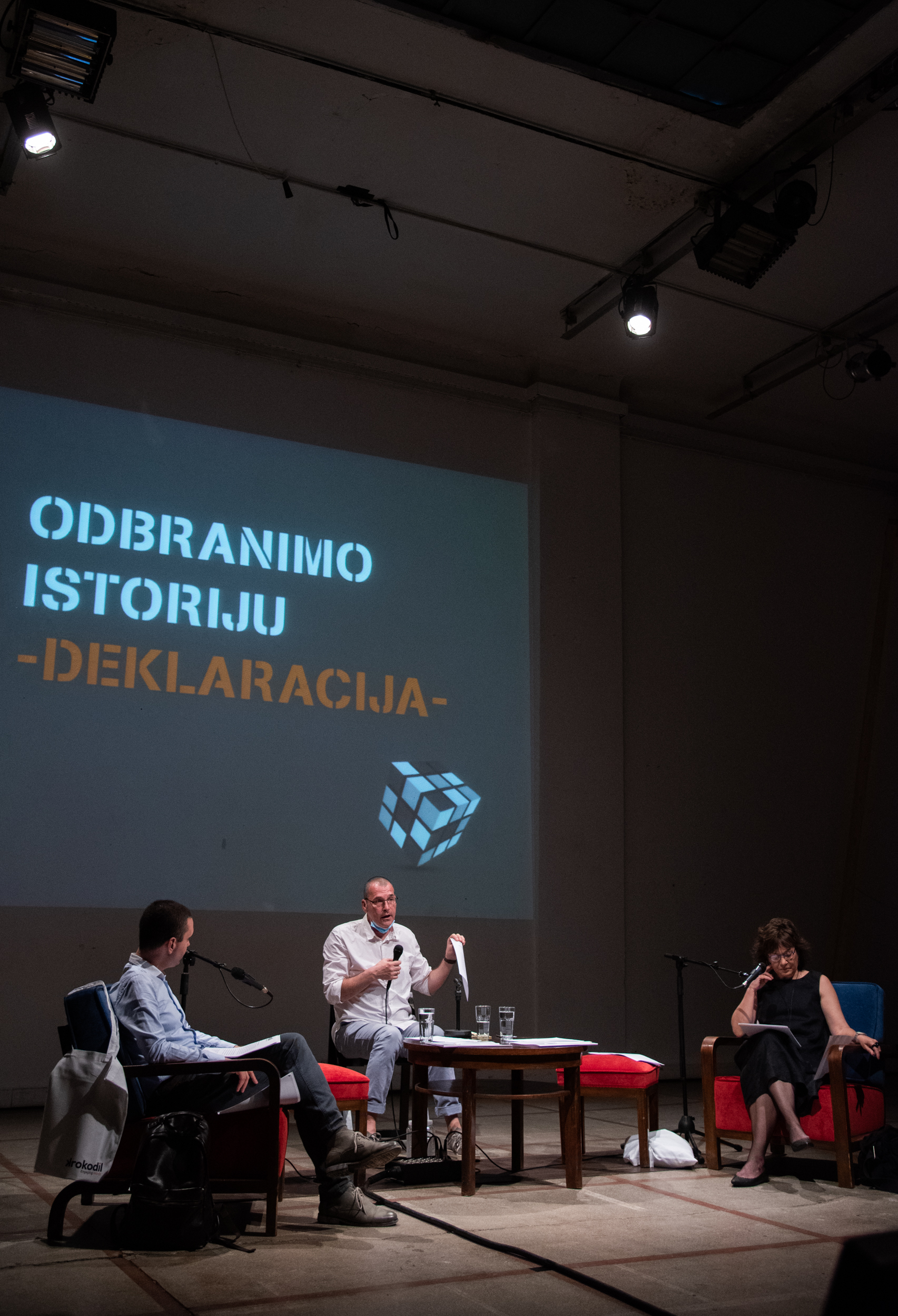 Posted at 15:48h in news by wpadmin 0 Comments
0 Likes
Share

„WHO STARTED ALL THIS? – HISTORIANS AGAINST REVISIONISM“ – FINAL CONFERENCE

On Saturday, June 13, the Declaration entitled “Defend History”, drafted by some of the most eminent historians from Serbia and regional countries, was publicized in the Belgrade’s Center for Cultural Decontamination. Before this important document was made public, it was already signed by many regional historians but also by a number of very influential figures from academic, public, political and cultural life such as sociologist Florian Bieber,  writers such as Aleksandar Hemon, Dubravka Ugrešić, Lana Bastašić, Filip David, Igor Štiks, Andrej Nikolaidis, musician Ida Prester, anthropologist Svetlana Slapšak, publisher Ivan Čolović and many others.

At the final conference of the project, writer Vladimir Arsenijević spoke on behalf of the Association KROKODIL. He was joined by Dubravka Stojanović and Milivoj Bešlin, two Serbian members of the steering group that worked on the Declaration. The rest of the members of the steering group – Božo Repe (Slovenia), Husnija Kamberović (Bosnia and Herzegovina) and Tvrtko Jakovina (Croatia), were not able to attend the conference due to the situation caused by the COVID-19 pandemic. Instead, they recorded video messages in which they discussed their experiences of the whole project and the importance that one such Declaration has in their countries.

Vladimir Arsenijević introduced the participants and activities and spoke about how the idea for this project was born. He explained that the project is a natural continuation of the previous project of the Association KROKODIL the “Languages ​​and Nationalisms” and the consequent Declaration on the Common Language. He added that the desire of the Association KROKODIL is to function simultaneously in a wide geographical area , referring to the region of the Werstern Balkans, as well as for the activities of the Association to be threefold, tackling language, history and literature. At the end of his introductory address, Vladimir pointed out that the project “Who started all this? – Historians against revisionism” was supported by: the Delegation of the European Union to Serbia, the Government Office for Cooperation with Civil Society and the Ministry of Culture of the Republic of Serbia while the implementing partner of the project is the Belgrade office of the German foundation forumZFD.

He then gave the floor to historians Dubravka Stojanović and Milivoj Bešlin, who talked in more detail about the project’s activities – conferences, historians’ residencies in Belgrade, seminars for history teachers and summer schools for students. After that, they talked about the peak of the project – the Declaration “Defend History”. The aforementioned members of the steering group worked on the final text of the Declaration with the help of colleagues from Montenegro and Northern Macedonia. Further suggestions were given by various historians from the region and the well known intellectuals including Magdalena Najbar-Agičić, Damir Agičić, Branimir Janković, Snježana Koren, Petar Todorov, Adnan Prekić, Olga Manojlović Pintar, Srdjan Milošević, Vladimir Arsenijević, Viktor Ivančić, Igor Štiks, Andrej Nikolaidis, Ivan Čolović, Florijan Biber and others.

The declaration was initially published and publicly read at the conference, after which all those present were invited to sign it on the spot immediately after the event. This document will be available on the website of the Association KROKODIL from Monday, June 15 for online signing.

After the publication of the Declaration, the remaining members of the Steering group – historians from Slovenia, Bosnia and Herzegovina and Croatia, Božo Repe, Husnija Kamberović and Tvrtko Jakovina – addressed the audience via video messages, talking about the importance of the project and the Declaration in the region.

In the end, it was emphasized that, although the project “Who started all this? – Historians Against Revisionism” formally ended with this conference, the Declaration “Defend History” will remain in the societies of the participating countries long after the project, exerting its influence.

After the project “Languages ​​and Nationalisms”, which dealt with the complex issue of the reality of the existence of four political languages ​​in the region, as well as after its grand finale – the Declaration on the Common Language, which 30 linguists and other experts worked on and thousands of people from the entire region of the Western Balkans signed – the Associatiion KROKODIL initiated a project called “Who started all this? – Historians Against Revisionism”. During this two-and-a-half-year long project, two large conferences were organized in Belgrade and Novi Sad, as well as twelve two-week residencies for historians from the region, seminars for history teachers and professors in Subotica, Novi Pazar, Leskovac and Belgrade and three summer schools for students from the region.

The main goal of this project is to create space for historical and intercultural dialogue by creating a network of historians, writers, journalists, students and the general public that will contribute to conflict resolution, mutually respected historical narratives, and foster a more inclusive culture of memory. The goal is that the project activities result in the creation of a sustainable platform that will enable acceptable interpretations of events from the recent and distant past using methods of a multiperspectival historical narrative.

The project “Who started all this? – Historians against Revisionism” was financed by the Delegation of the European Union to Serbia. It was implemented in close cooperation with the organization forumZFD Serbia. The project was supported by the Ministry of Culture and Information of the Republic of Serbia as well as the Office for Cooperation with Civil Society of the Government of the Republic of Serbia.

You can read the text of the Declaration in all variants of the common language by clicking HERE as well as the versions in Macedonian and Slovenian.

You can listen to the audio recording of the conference on the KROKODIL podcast page.

You can watch the video recording of the conference on the KROKODIL Engaging Words YouTube channel.