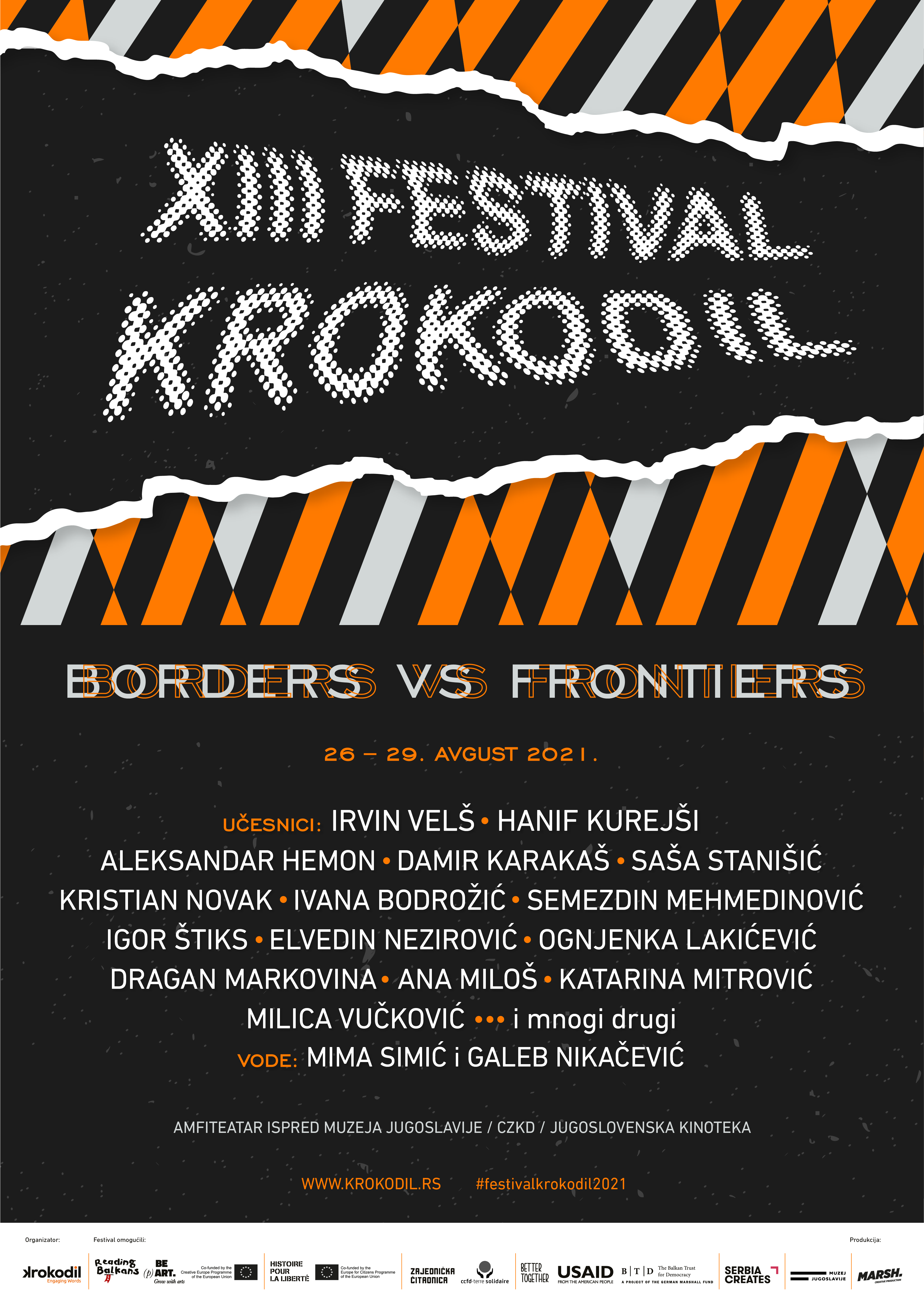 Evening program
August 26, 27 and 28 at 8 pm, amphitheater in front of the Museum of Yugoslavia, Mihaila Mike Jankovića 6, Belgrade.

The thirteenth edition of the KROKODIL literary festival will be held in Belgrade from August 26 until August 29 under the symbolic title BORDERS VS. FRONTIERS. This year, in the specific atmosphere of the now long-lasting Covid-19 pandemic, when the rules are no longer clear to anyone, the KROKODIL festival puts in a dialectical relationship the borders that hold us back in place with the frontiers that we can reach and are there for us to constantly move them.

So today, at a time when we know more about ourselves and where we as a species are going than ever before, but when at the same time our confidence in the ability to preserve the human race and the world that we inhabit together with other species is at its lowest point ever, it is precisely this dilemma – what are, ultimately,  our ingrained, unescapable limitations and what are the furthest reaches of  our capabilities? – that is of particular importance.

Borders vs. Frontiers, then.

Across four festival days (Thursday, Friday, Saturday and Sunday), a top selection of local, regional and international authors will be presented at the amphitheater in front of the Museum of Yugoslavia, at the Center for Cultural Decontamination and at the Yugoslav Film Archive. The audience will have a chance to enjoy readings, conversations, sofa interviews, meetings with journalists and the audience, book signings, panel discussion programs, debates, promotions, screenings etc. All festival programs will be free of charge for the audience present at the venues and open to the public, while there will be ONLINE tickets available via the internet platform entrio.si for the LIVESTREAM of the evening program in front of the Museum of Yugoslavia.

The grand opening of the festival is scheduled for Thursday, August 26 at 8 pm at the amphitheater in front of the Museum of Yugoslavia, when two writers who are certainly among the most important British and global authors of today – Irvine Welsh and Hanif Kureishi – will present themselves to the audience in a conversation with Mima Simić and Galeb Nikačević, but also by reading excerpts from their work. The conversations will be held in English, and simultaneous translation will be provided.

On the second evening of the festival, on Friday, August 27, at 8 pm, at the same place, we will present Igor Štiks, Ognjenka Lakićević, Ana Miloš, Damir Karakaš and Elvedin Nezirović while Aleksandar Hemon will participate in the program online from his home in Princeton, USA. A special segment of this evening will be dedicated to the memory of the tragically deceased and regionally beloved writer Bekim Sejranović. Excerpts from Sejranović’s work will be read by actor Leon Lučev, while publisher Ivan Bevc and prose author and poet Milica Vučković will speak about Bekim, his life and work in a conversation with Vladimir Arsenijević.

On the third evening of the festival, on Saturday, August 28, at 8 pm at the amphitheater in front of the Museum of Yugoslavia we will present Dragan Markovina, Ivana Bodrožić, Katarina Mitrović, Kristian Novak, Semezdin Mehmedinović and Saša Stanišić who will join us online from Hamburg, Germany. This evening, in a short conversation, historians Tvrtko Jakovina, Dubravka Stojanović, Ruža Fotiadis and writer Semezdin Mehmedinović will announce the conference Histoire pour la liberté, which closes this year’s KROKODIL festival on Sunday, August 29.

During the traditional KROKODIL Festival’s Debate program, we will deal with the most current socio-political topics from the perspective of culture.

The debate program will be held on Saturday, August 28, at 11 am and Sunday, August 29, at 12 pm at the Center for Cultural Decontamination (Birčaninova 21).

On Saturday, August 28, at 11 am, the Debate program will begin with the presentation of the project Unifying Power of Diversity: European Literature through Time, Genres and Languages ​​of the publishing house IPC Media. Two authors whose works have been translated as part of this project – Marcin Wicha (Poland) and Darko Tuševljaković (Serbia), as well as Spanish author and translator Miguel Roan, will touch upon the diachronic view of the diversity of European languages ​​and the genre diversity of European literary traditions, as well as the contribution of the Serbian and regional literary scene to the polyphony and polymorphism of European literary voices. The conversation will be moderator by Aleksandar Božić from IPC Media.

This program will be followed by the Borders vs Frontiers debate, in which author Elvedin Nezirović (Bosnia and Herzegovina) will take part in addition to the journalist and cultural worker Arif Muharremi (Kosovo) and Polish writer, illustrator and designer Marcin Wicha. This conversation will be moderated by journalist Ljubica Gojgić.

A regional panel discussion within the Better Together project will be held on Sunday, August 29, at 12 pm, bringing together a large number of representatives of NGOs from the Western Balkans (Serbia, Montenegro, Bosnia and Herzegovina, Northern Macedonia and Kosovo) and European Union (Croatia, Slovenia, Bulgaria and Romania) in the discussion on the way in which state institutions responded to the pandemic in relation to the non-governmental sector, and especially in relation to organizations in the field of culture and creative industries. The negotiating abilities and capacities of these organizations in extraordinary circumstances will also be discussed.

The fourth and final evening of the thirteenth KROKODIL Festival will be held on Sunday, August 29, at 6 pm at the Yugoslav Film Archive. During this evening, the latest book from our Common Library series, Youth, with the texts written by Svetlana Slapšak and Aleksandar Hemon, will be presented, along with the integral Common Library edition, which includes all nine books published so far. The editors of the Common Library, Vladimir Arsenijević and Igor Štiks, will take part in the conversation, as well as some of the authors who have contributed to this project with their essays.

The closing event of this year’s KROKODIL Festival will be the Histoire pour la liberté conference, where participants will discuss the responsibility of historians and non-historians for creating historical narratives and shaping the politics of memory. Participants include Ivana Bodrožić, Igor Štiks, Semezdin Mehmedinović, Damir Agičić, Husnija Kamberović, Tomas Schad and Milivoj Bešlin. The discussion will be moderated by Dragan Markovina and Tvrtko Jakovina.

The entrance for all programs in front of the Museum of Yugoslavia, in the Center for Cultural Decontamination as well as in the Yugoslav Film Archive will be free. Attendees will be invited to support the program of this year’s festival with a symbolic donation.

For those unable to join us live in Belgrade, we are organizing high quality livestreams of all the programs taking place at this year’s KROKODIL. The evening programs will be livestreamed at entrio.si and the audience will be able to join them by purchasing a ticket through our website. Ticket holders will be able to watch the program of all three evenings until September 1.

Early bird tickets will be available until August 20 and will cost 8 EUR for the first evening of the program, while the early bird ticket price for the second and third evening is 6.5 Eur. From August 21, the ticket price for the online program will be 10 Eur for the first evening and 8.5 Eur for the other two evenings. It is also possible to purchase a ticket combo for all three festival evenings. The early bird price for this combo will be 18 EUR until August 20, and 24 EUR starting August 21.

The debate program of the Festival will be livestreamed on our YouTube channel – Krokodil Engaging Words, and free to watch.

The organizer of the KROKODIL Festival is Association KROKODIL.