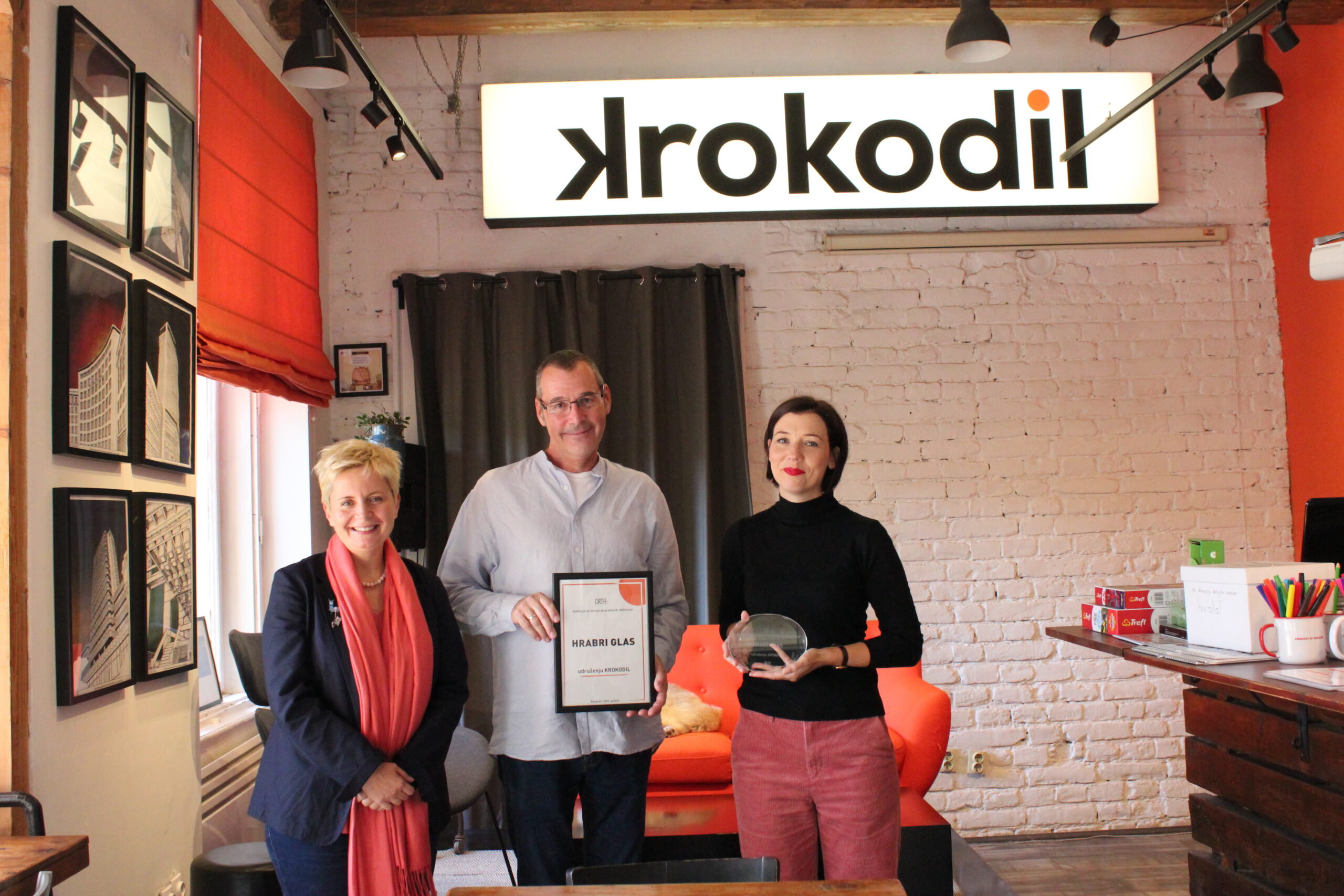 Posted at 13:10h in news by wpadmin 0 Comments
0 Likes
Share

The KROKODIL Association won the “Hrabri glas” (Brave Voice) award for 2022 which CRTA (Center for Research, Transparency and Accountability) awards to individuals and groups that with special courage fight for the common good.

Solidarity with the citizens of Ukraine and the material support provided and delivered by KROKODIL in the form of humanitarian aid for the City Perinatal Center in Kharkiv, i.e. for prematurely born babies in war conditions, is the reason why CRTA decided to publicly express its respect for the association, which is known primarily for promotion of literature and creation of cultural activities and programs.

The way in which the KROKODIL team connected with the health institution in Serbia, organized fundraising and traveled to a war-torn country is an inspiration for all civic activists.

“To stand by the one who is attacked is always an act of courage, especially in conditions when it means opposing the prevalent public opinion,” said Vukosava Crnjanski, director of CRTA, on the occasion of presenting the award to KROKODIL. “Under the influence of media propaganda, the majority of Serbian citizens, as the researches of CRTA show, opt for the aggressor in relation to the war in Ukraine. That makes the voice and tangible work of KROKODIL even more important and courageous, as a sign that truth and conscience have not completely died out in our society.”

“When the Russian aggression against Ukraine started, we understood that the response of this society would not be what we would have hoped for. And that’s reason enough to roll up one’s sleeves.” said Vladimir Arsenijević, from the KROKODIL Association. “We came into direct contact with the City Perinatal Center in Kharkiv, which at that time was under the intense shelling by Russian attackers, and the staff of the Perinatal Center had to move incubators with premature babies into shelters on a daily basis. When we asked them what they needed, they literally said: Everything.”

Previous winners of “Hrabri glas” award are: Milenko Jovanović, whistleblower from the Environmental Protection Agency, Aleksandar Obradović, whistleblower from Krušik Holding Corporation, Marija Lukić, who bravely spoke out against sexual harassment in the municipality of Brus and the initiative “Ne damo niški aerodrom” (We will not give Niš airport).

CRTA proudly points out that it singled out KROKODIL in a year in which there were many other exceptional examples of civil courage in Serbia, primarily in the fight for women’s rights, as well as regarding the protection of natural resources and the environment against investor urbanism, corporate greed and an irresponsible state.

Association KROKODIL, as an independent organization from Belgrade with literary, artistic and socio-political activities has decided to provide shelter and support to Ukrainian literary creators on top of other activities related to Ukraine such as collecting humanitarian help for the City Perinatal center in Kharkiv etc. Being that a large number of Ukrainian writers have been offered similar programs in many European countries, we decided to open the doors of our residence for writers to all literary creators (including, besides prose writers and poets, also essayists, translators, editors, cultural journalists, comic book authors, theoreticians, columnists, singer-songwriters, rappers, spoken word performers, etc.). Residential stays are being realized from October 2022 to June 2023, and during that period we will host a total of eight literary creators from Ukraine. This project of the Association KROKODIL is supported by: The European Cultural Foundation, Heinrich Böll Foundation, FRIDA and Pobunjene čitateljke

Since August of this year we have also been regularly organizing creative workshops for children from Ukraine. More information can be found HERE and HERE.

As a part of the series of activities dedicated to Ukraine, we have also enabled the creation of a mural with the image and selected verses of Lesya Ukrainka, the quintessential Ukrainian poetess, which was unfortunately vandalized a few days later. Read more about it HERE.