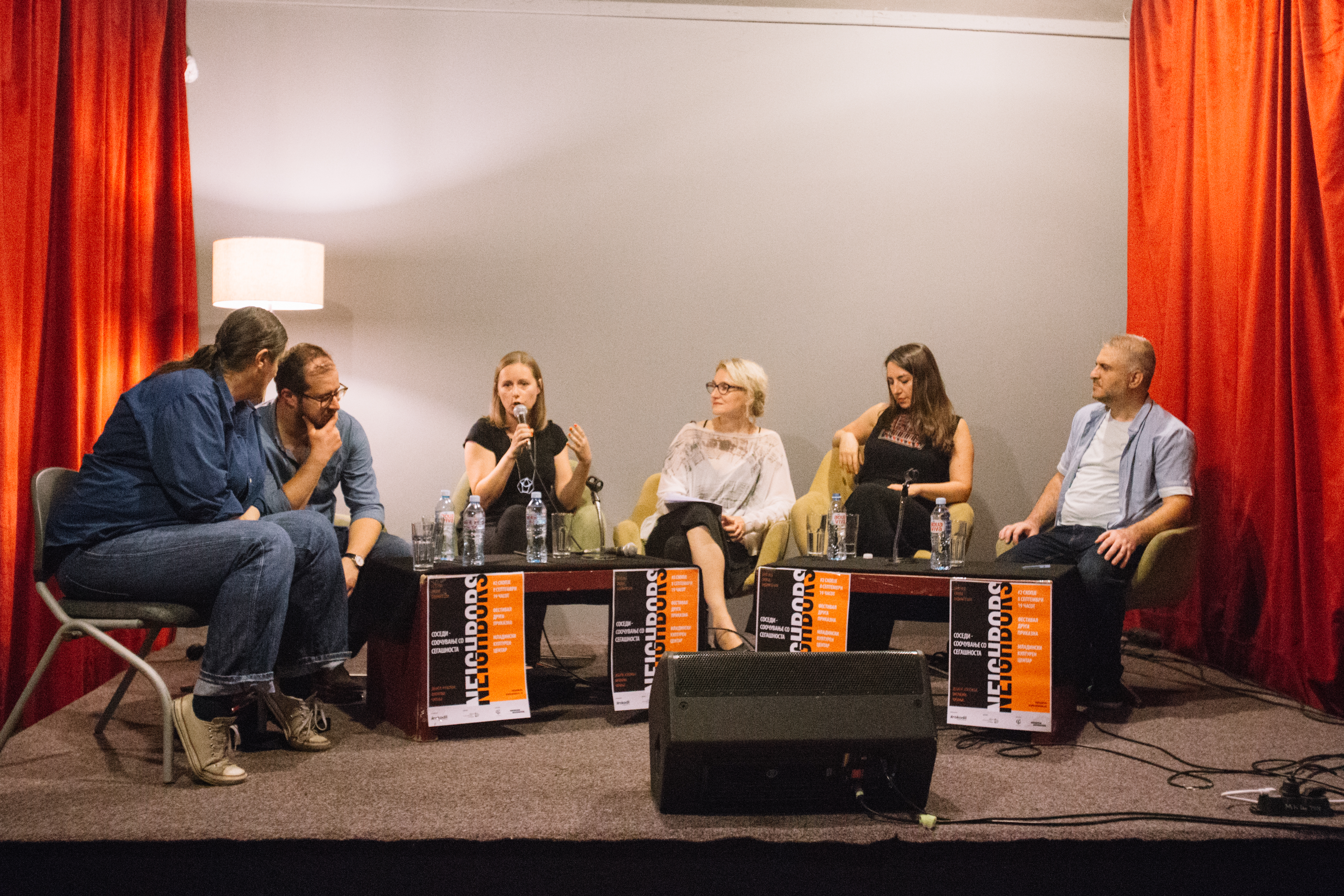 Posted at 12:20h in Uncategorized by admin 0 Comments
0 Likes
Share

The second Neighbors Facing the Present debate in Skopje took place within “Another Story” literary festival, which was held from September 5 to 8 at the Youth Cultural Center in Skopje. The debate took place on the last day of the festival, September 8, at 7 pm. Participants in the debate were Ana Nedeljković from Serbia, Dénes Krusovsky from Hungary, Iskra Geshoska and Rumena Bužarovska from North Macedonia. The event was moderated by Vladimir Jankovski.

The event began with the screening of the film “Untravel” by Ana Nedeljković and Nikola Majdak. Following the screening of the film, the moderator of the event gave a brief introduction to the context of the debate. As stated in the project description and press release, the context has been the changes in the political and social situation in the Western Balkan and Eastern European countries in recent years, in the background of the refugee crisis, the strengthening of the far right movements, and the growing popularity of populist political parties in Europe. The first question posed to Ana Nedeljković was the question of how much she believes in the possibility that an artist’s work can change the context in which she/he creates.

Ana Nedeljković’s thesis for the active role of the artist in society was followed by Iskra Geshoska, who emphasized that rebellion and discontent is one of the key drivers of artistic and creative activity in general. For Iskra Geshoska, art has the task of creating “conflict situations”, in an Aristotelian sense. Conflicts that have to lead to liberation, to catharsis. For her, the artist is responsible for guiding us along such a path. Those who narrate through words and images the longing, the truth of sadness and the joy of the world necessarily take responsibility for risk and adventure in the struggle against security and comfort. Safety and comfort are imperatives of our time, of a social concept devoid of ideologies and utopias. They are the relevant visa for a successful resume. But the artist, the one who penetrates the world boldly and willingly to pass through it with open wounds must be in constant resistance. The artist is an activist, and a true activist should be a dedicated lover, which means taking risks, experimenting, offering new worlds. Artistic resistance, much like the political one, must imply love, madness, courage, uncompromising, method, knowledge, structure, longing for a better world. Passion for different forms of truth. So willing to travel alongside the underlying culture of culture, while at the same time exhausting to critically penetrate every pore of the existing and less attractive world.

Writer Rumena Bužarovska was asked about her stance on the issue of “engagement in literature”. In a country like Macedonia, due to the experience of the artists’ connection with the concrete ideology of the former, socialist system, the engagement of the artist often had a negative tone. That negative tone came from the association of artists with the ruling ideology and their acting as a kind of apologetics of that ideology. Bužarovska, who in her works is a subtle critic of contemporary Macedonian society, and her books had an open feminist thread, emphasized that the conception of engagement in art was not negative to her, but rather the opposite. She believes that critique of retrograde processes in society is crucial, and that it is very important for the artist to choose the measure in that process in order its action not to get a pamphlet dimension.

The participation of Dénes Krusovszky, the author from Hungary, was used most to contextualize his presence to the contemporary political situation in Hungary, a country that seems to be leading the way in the negative attitude towards refugees, the migrant crisis and the growth of political populism. Krusovsky noted that he thinks the situation in Hungary is very specific in terms of artistic freedoms. While there may be no direct pressure on individual artists to act individually, the official government through its support and subsidy system is trying to influence the cultural sphere, win over a number of artists, or silence those who are more critical of it. In the end, he added, art should always be critical and problematize dominant social paradigms.

Pictures of Serbian photographer Igor Čoko were also presented during the debate.

The main aim of the project “NEIGHBORS – Facing the Present” is to engage authors but also other artists and intellectuals in intense debate about the present circumstances in different countries of the region (Hungary, Serbia, Macedonia) in order to influence the development of literary and arts connections, open borders, as well as to empower those that are interested in culture as such, to promote culture of dialogue, reconciliation and reconstruction of the broken links particularly in the region of the Western Balkans in relation with Central Europe and the surrounding EU-countries following the sharp rise of conservatism and the new wave of ethnic and national withdrawal and protectionism motivated by the economic crisis as well as migratory waves from the Middle East via Balkan route (Greece-Macedonia-Serbia-Hungary) towards the more politically and economically stable countries of Western Europe.