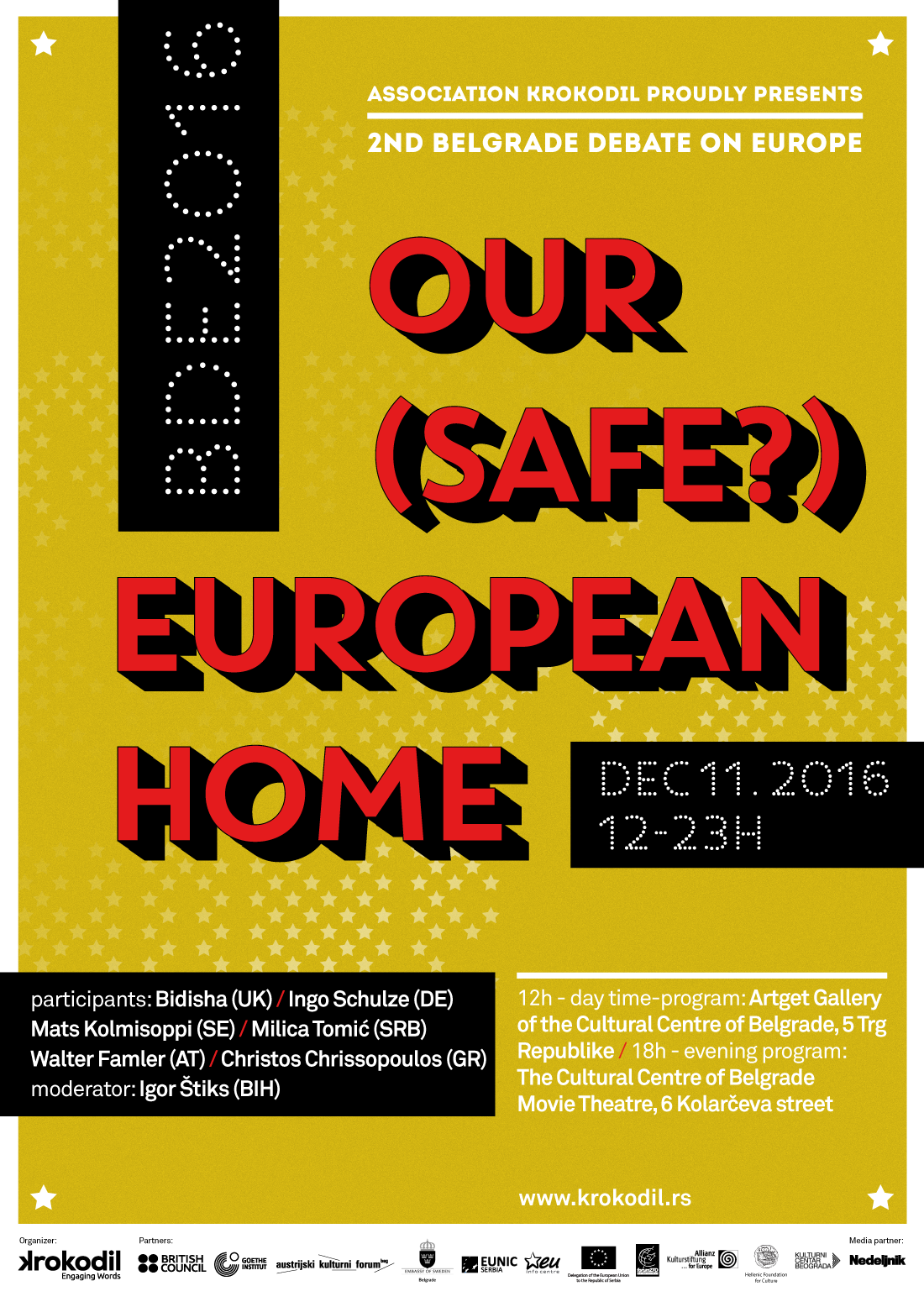 On Sunday, December 11 from 12.00 in gallery Artget second Belgrade Debate on Europe under the title “Our (safe?) European home” will be officaly openned. Central event of this year’s debate will be the main evening program from 18.00, in the cinema venue of Belgrade Cultural Centre (Kolarčeva 6).

This one-day event will, in its dynamic mosaic-like structure, gather six prominent intellectuals from different parts of European continent, from Great Britain and Germany, to Southeastern Europe and Greece. Through daily seminars, workshops and lectures, as well as the main, evening program, our participants will analyze various burning topics of contemporary Europe.

Bidisha, a newspaper journalist and BBC radio and TV broadcaster from Great Britain will give the lecture in scope of the daily program in gallery Artget, under the title “Asylum, refuge and exile”. Drawing on her experience of the last few years as an outreach worker with asylum seekers, refugees and undocumented people in London, she will attempt to put the individuality, compassion and humanity back into the debate about the refugee crisis and pinpoint the personal stories of the people she works with. Bidisha will also look at the way politicians and commentators have interpreted these events and the messages they are sending to voters and readers. She will also put the refugee crisis into the political context of the rise of far-right populist nationalism and racism in Western European countries and America, in the xenophobia and insularity which led to the UK’s decision to leave the EU and the increase in reported racist street-crimes both in Europe and in America.

“Borrowed speech” is the title of the lecture by Greek writer Christos Chrysopoulos that will deal with the very definition of “home”, looking back to his hometown of Athens and the feeling of disinterest, conflicting ideas and interests that tear contemporary Greece apart.

Walter Famler, famous political activist from Austria, secretary general of artistic association Alte Schmiede and long-term editor of the magazine Wespennest, but also the founder and former editor of Eurozine, will give a lecture entitled “Tibor and Ema, European Story”, while the December guest of KROKODIL’s Writer-in-residence program, Swedish journalist and fiction writer Mats Kolmisoppi will hold the workshop inspired by themes he actively engages in in writing, media work and social activism.

Bidisha, Christos, Walter and Mats will in the evening program of Belgrade Debate of Europe be accompanied by Ingo Schulze, one of the most renowned German writers, and visual and conceptual artist Milica Tomić from Belgrade, that is currently working as a professor at the Institute for Contemporary Arts within Technical University of Graz, Austria.

The focal topic of the intensive discussion moderated by Igor Štiks will be all the burning questions of contemporary Europe, divided into two rounds: Edges of Europe / Europe on the edge, and History: a burden or an inspiration. Besides inevitable topics such as Brexit, refugee crisis, terorism on European soil, but also the victory of Donald Trump and the consequences this event can have on European stability, the debate will also include other important topics of today, such as problematic position of the youth, economic crisis and unemployment, the loss of faith in European unity project, and heavy identity crisis, the rise of nacionalistic right-wing parties throughout the continent. All those questions present open wounds that all Europeans, disregarding their geographic position, feel in almost the same way. This feeling is represented in the question mark in the title of this conference. It also provokes the one question that we care most about: What does the future bring?

The first Belgrade Debate on Europe entitled “What do we talk about when we talk about Europe” was held in December 2014 in Belgrade, as integral part of the series of European debates organized by German Academy for Language and Literature in cooperation with Berlin based foundations – Allianz Kulturstiftung and S. Fischer Stiftung, and the Federal Government Commissioner for Culture and the Media, with Goethe-Institut from Belgrade.

Conference is financially supported by Delegation of European Union to the Republic of Serbia, and EU info centar. Media partner: Nedeljnik.