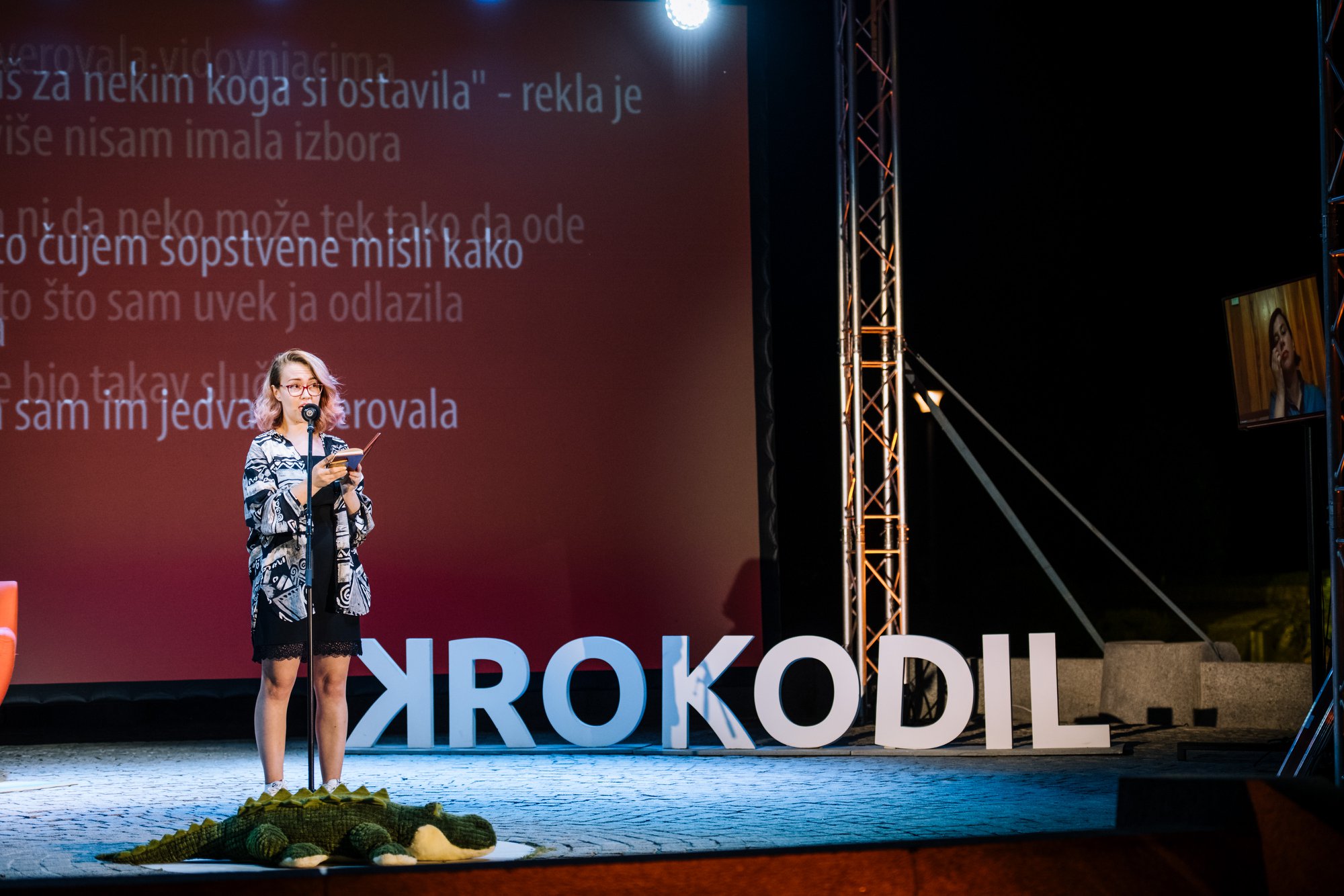 Posted at 11:17h in Uncategorized by admin 0 Comments
3 Likes
Share

This year’s Krokodil festival, titled Remake/Remodel hosted many amazing women: writers, painters, activists, and all-around intellectuals. As volunteers for Krokodil’s Journalist for a Day program, we got the chance to speak with one of those talented ladies. Our interviewee was Kosovo Women’s Network’s leading activist Adelina Tërshani. Adelina is 23 years old, but she has already had a lot of experience fighting the patriarchy that is predominant in her homeland. In the interview, she opened up about different aspects of being an activist, as well as being a slam poet. Here is her take on this very polarising, and sometimes very dangerous topic.

Q: You are a feminist, activist, and poet. What are the advantages of slam poetry in comparison to other, more traditional forms of expression? How does the spoken word help you when you slam the patriarchy?

A: I’ve been writing since I was little. But my style has always been different. When I write poems, I have the intention of performing them myself. The form is spoken word. Slam poems are usually not the ones you can read and re-read and then ponder about what the poet wanted to say. The whole idea of slam poetry is to give the public space not to think but to listen. To do so, I need to be direct.

In 2017, after participating in the Women’s Rights march, I performed the poem „Patriarchal logic“. My performance went viral, which was something I didn’t expect. Another thing I didn’t expect was the public’s reaction. it wasn’t only my poem that received negative criticism, but I myself have also received threats and was physically attacked. That was the beginning of my career. I’ve realized that that type of reaction and those type of people are only proof that the patriarchy exists, proof that women are being mistreated and proof there is truth in my words. If you are not bothered by my poems and if the topics I speak about don’t affect you, you don’t react in such an ill-spirited way. That was when I realized that slam poetry was for me.

In Kosovo, I am considered a radical feminist. Mostly because of the content of my words and the way I speak – in short, the way I slam the patriarchy. Slam poetry is not always an advantage – many people have never even heard of it. Every time I perform, many people are confused, while others just don’t understand. Even the media reported that my spoken words were nothing more than a speech. In Priština, I’m trying to build a community that creates slam poetry. The public considers us to be very harsh critics because our poems are mostly about women’s rights. I love talking to other women and hearing their stories – they inspire me. There are certain difficulties every woman has to go through just because she is a woman. I write based on my own experiences but also based on the experiences of the women I talk to. I try not to romanticize it, I try to be direct. My goal is to make the patriarchal system uncomfortable, especially men. And so far, it is working.

I don’t always feel comfortable, but that feeling goes hand in hand with me feeling like activism is my duty –  that’s what I was born to do.

A: Yes, definitely. I think us women have to work much harder than men to have a platform and be on a stage of our own. That’s why I was so excited by this opportunity to be here in Belgrade. Once I’ve received the invitation to be a part of this year’s Krokodil festival, I knew I had to come! Even though we are all still living through a global pandemic, I felt I needed to be a part of this festival and be here in person. I just love the idea of bringing women together, especially poets. We don’t get much of a platform publicly to share our works and ideas.

Regardless of that, there are times I think, “We’ve got it all. What am I even fighting for?“ But then I remember the environment I grew up in – I was born in a village, and although it is just a town away from Priština, there’s a huge difference in mentality and women’s rights. People who don’t agree with me sometimes make me question what I’m fighting for. But every time I go back, I am reminded again that what I’m fighting for is legit – girls in my village, for example, can’t go out after 7 pm, because they don’t feel safe. If you as a woman had the privilege to grow up and live in an open-minded circle of people, lucky you! But don’t think that your experience is everybody’s experience. We women need to talk to each other and listen. The change in Kosovo is supposed to happen from Priština, and it can only happen if we get outside this bubble. Whenever I go back to my village, people avoid me, they think of me as the crazy girl – they fear if they talk to me I’ll expose them, that I will put their opinions in my poems.

I do think that the public’s reaction to my poems is based on my gender – they would have reacted less or not at all if it was a man saying my words and speaking my truth. So to answer your question, we are still not even halfway there.

Q: You were quoted saying “Girls need a role model that is one of them“. Do you feel like activism is your duty? How did your understanding of the word “role model“ change with age and experience?

A: I tried to emphasize the importance of a role model. I see women my age or even younger girls that look at you as an untouchable icon. That’s why feel I need to go back to them, be one of them and as such, listen to their stories. That’s why I’m doing this – I am doing this for them. I’ve had to work hard, and I’ve passed some of the obstacles many women face – I can go out after 7 pm for example. but I have to understand that there are women who still can’t do that. I have a voice, and with that voice, I can shine a light and transmit, not only my own problems as an individual but the struggles of other women.

When girls share their experiences with me, I always try to convince and encourage them to go public themselves, to tell their own story. It’s good when somebody else can share your story when you can have Adelina telling your story, but having your own voice, that is the most important thing. but if, because of circumstance, they can’t speak up on their own. I try to make their stories public and make people aware that these struggles exist.

I don’t always feel comfortable, but that feeling goes hand in hand with me feeling like activism is my duty –  that’s what I was born to do. That fucks me up sometimes because this duty is like a boomerang – you don’t see the benefits of it right away. It’s always a struggle for feminist activists because you have to deal with people who don’t believe that we live in a patriarchal system, and that takes energy away from working and fighting against the patriarchal system. Those people start cutting ties because you are the radical one, but in the end, it filters out the people who don’t want to understand or don’t want to change, and in the end, there is a huge benefit. Activism is not easy, but I enjoy doing it and I’ve seen it has an impact on people. That’s why I want to keep doing it.

Q: Since you’ve gotten involved in Kosovo Women’s Network, what are the improvements in women’s rights that you’ve noticed, and what do you think is yet to be addressed? At this moment in time, is there an increase in awareness or direct action?

A: I can say both. The good thing about the NGO that I work for is that it’s actually a network. We have around 160 NGO’s that are working locally, like Kosovo Women’s fund. With their help, we finance and give small grants to these NGO’s, so they can work locally. Of course, as I said before, we from Priština need to acknowledge the difference between the urban and rural areas. We need to give money to local organizations so they can act locally since they know their problems better, so it’s easier for the local activists to address them. Their community knows them and it’s easier for them to accept any change they might suggest. We also do huge campaigns that go viral and are sometimes interesting to other people, because we cover different topics, based on our strategy. Those topics include gender-based violence, gender-based discrimination at work, etc. We also have different programs concerning the law, we check the law from a gender perspective to see what is missing, and then we try to change the laws to directly include women’s problems.

The awareness has improved, if talking about gender-based violence, we see that more women are reporting cases. That means that the awareness has improved, not only due to our NGO but the individual activists who promoted the idea of reporting cases of violence. So now, women are much more encouraged to do exactly that. Before they didn’t believe in the institutions, so it’s very important that we made this change. This network and our members are really important to us, we help them all the time with grants: we fight for them to get the grants, we explain who the donors are, but our members are the ones that make the change.

Q: In the past, you were one of the organizers of the demonstrations for women’s rights, you were also part of the delegation that met with prime minister Kurti to discuss women’s rights. Given the obstacles of the pandemic, how do you see the activism changing? Do you think that it can still remain in its physical form, or will there be a new way of spreading awareness and taking action?

A: There can always be new ways, but personally, I find it very important to protest on the street. That’s why, during quarantine, we went to the square of Priština and we spray-painted dots two meters apart from each other so that people can have a space for whatever they wanted to protest. We feel it’s important to keep protesting, even during the quarantine. In that sense, we found it could help people to go out and demonstrate, protest, if we, as activists, create this environment.

Also, with a different group I’m anonymously a part of, we performed actions publicly, physically, and we tried not to include too many people, to avoid risking anyone’s life, but we kept it going. So, it wasn’t that much of a change in terms of the effects of the pandemic on our activism. I found that very inspiring because it didn’t stop us. We tried different techniques to inform the public, everything had to be photographed and posted on social media because not everyone could come in person, we were in quarantine, but still, that didn’t affect our spirit.