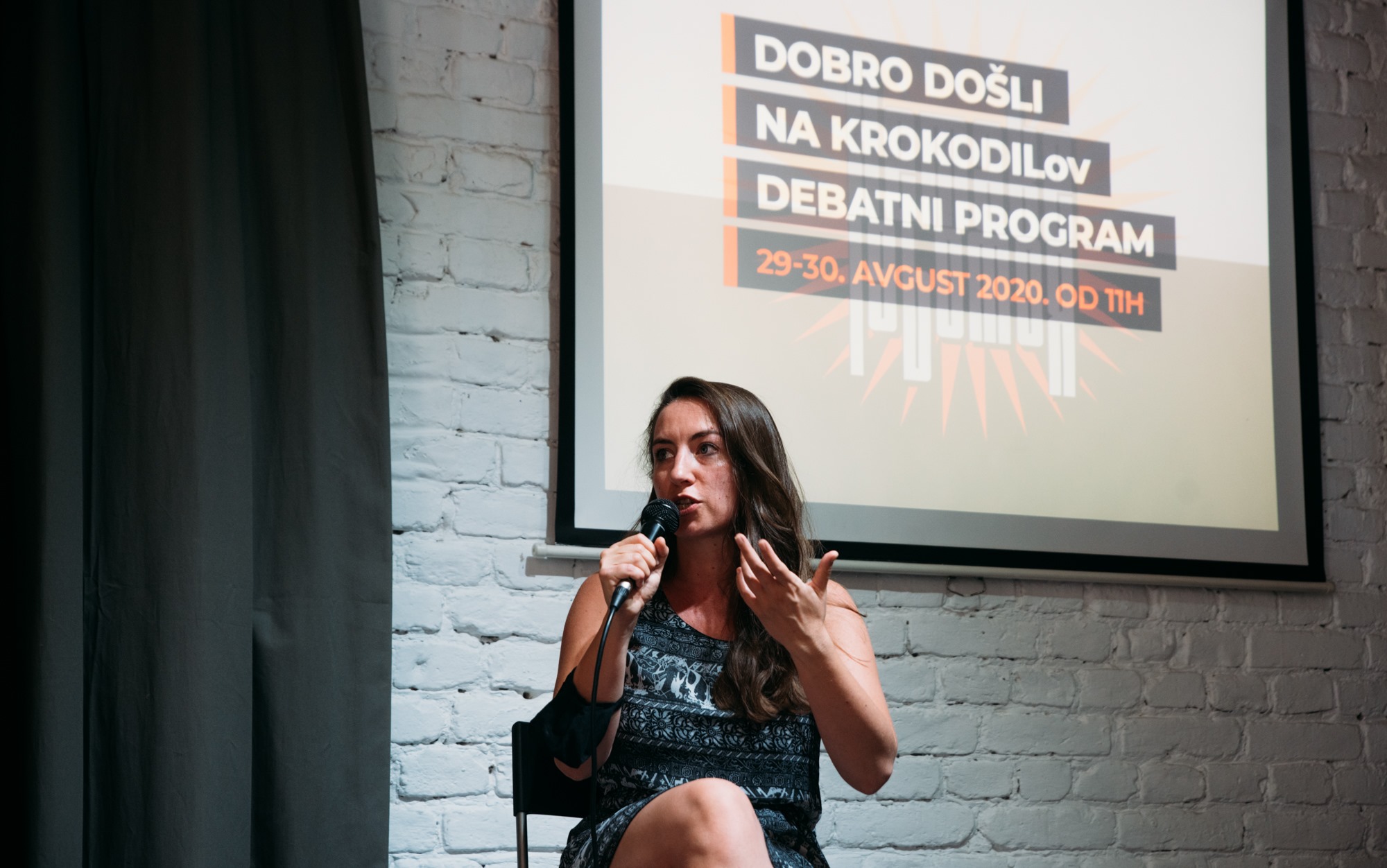 On Saturday morning, on August 29th, at precisely 11 am, the First Debate of this year’s KROKODIL Festival began. The Debate “Between Languages”, was also held between reality and the online world. The KROKODIL Center, at Karađorđeva 43, hosted the guest speakers and a small audience, while the Krokodil Engaging Words’ YouTube channel live-streamed the debate for the public tuning in online. The concise, dynamic debate featuring Rumena Bužarovska, Slivija Monros, and Svetlana Slapšak gave us an insight into the opinions of the authors regarding this very topic.

The topic was Languages. What is Language? The moderator, Vladimir Arsenijević, a writer and one of the co-founders of KROKODIL, answered this question when the debate started: “Language is a writer’s home”. So what happens when a writer is forced to leave its home and transition into another language, and in the process live between languages?

Rumena Bužarovska, writer and assistant professor of English language at the University of Skopje, discussed this topic from the perspective of a native Macedonian speaker, for whom it was a given to speak and understand Serbo-Croatian.“I was expected not only to speak it but also to write in it. In our eyes, Serbian is a language of culture”. That was something that took a lot of work. From her perspective, it is the cultural and historical connection that brings countries and languages closer together, which is also the reason why the local authors achieve great success in the entire region. Ever since 2014, there has been a massive movement of translating classic and modern literature into Macedonian. “If one person translates 40 books in two years, the texts aren’t going to be creatively adapted into our language”. Lately, it has become much harder to buy original books in Serbian or Croatian in Macedonia, the bookstores sell mostly Macedonian translations or English versions of bestsellers or classics. That is why the avid readers resort to either buying antique books or buying the originals when traveling the Balkans and then trading them with their friends in order to stay up to date on contemporary authors of the region.  “If I write in Macedonian, the wider Yugoslav audience doesn’t understand me”, she adds. After Yugoslavia was no more, it seemed like in Macedonia, Serbo-Croatian was no more. Nowadays, it is no longer the question of Serbo-Croatian VS. Macedonian, since most of the young people now speak a pidgin form of their native Slavic languages, which is embedded in the syntax of the globally spoken English. She continues: “English terminology is used more and more. Young people are also leaning more towards English than Serbian”. In doing so, they are losing ties with the region their parents grew up with. In the territory of ex-Yugoslavia, we do have a shared regional culture. “And while just by listening to the language of an individual you can pinpoint where the speaker comes from, what their lifestyle is, and more, the fact is, regional identity through language exists”, Rumena concludes.

Silvia Monros, the rara avis of Serbia, is an author and translator. She was born in Argentina to Catalonian parents. „When I came to Yugoslavia in 1961 I didn’t have a drop of Serbian blood in me. “ But because she spent the majority of her life in Belgrade, when you ask her where’s she’s from, she simply replies: I’m from Čubura. At university, she also studied French. It was hard for her to start speaking it, because of the similarity between Catalonian and Provencal French. In our region, people often think she is Slovenian or Macedonian due to her accent and pronunciation. In Argentina, people often ask her where she learned to speak such good Spanish. Language is the basic human mediator, it shapes our behavior. Language is not fixed, she says, it changes with time and if not used, falls into oblivion. Silvia also briefly touched upon translating from Spanish to Serbian and vice versa.  She translates poetry to stay in shape, but she says she struggles more with prose, because of the terminology and informal language. That is why, when translating, she consults people living in Spain, because they are in constant contact with the living language. “The two most difficult things to translate from Serbian are family relations and toponyms“– they are almost untranslatable because they are tightly connected to the culture.

Svetlana Slapšak is a Slovenian writer, who joined us over video-call. She is a linguist by trade so for her, language is just an instrument: she writes novels in Serbian to express comedy, essays in Slovenian because of the publishers, she also writes columns in English, since it’s the language of academia, and she writes poetry in Greek – she uses a specific language for a specific purpose she needs. Unlike Rumena, who was advised to write in Serbian, she admits: “Ever since 1993, I was forced to write in Slovenian”. Because she still caries the Yugoslav literary tradition, she says that in her country she is not considered a Slovenian author. “Ever since the wars, we have been living in the empty space that once was Yugoslavia. Inhabiting a space that doesn’t exist, inhabiting the emptiness – that can serve as a replacement for the identity we all lost.” There is an explicit motif of nonbelonging in her words. However, she considers it a blessing: “As writers the status of nonbelonging to one particular culture is a place of privilege. We aren’t confined to a language or a culture, unlike those who often feel pressure to express themselves in their native language”. Although the conditions for writing literature are very accessible now, she feels that culture has become the ultimate consumerist product. “Literature should be intended for Otherness.  Literature should face the disapproval of the public and should address difficult topics, but that is no longer the case.” She feels that literature will have an important role in the future if it survives, the way it has played its role after the tuberculosis outbreak in the past. She agrees that creativity has decreased lately, especially when compared to the Yugoslav literature of the ’80s.

In the Balkans, when we talk about language today, there are two great problems:  On one hand, there has been a practice of violence towards languages and the pressure that each nation of ex-Yugoslavia has their own national language. On the other hand, our languages have been colonized by the Anglo-American culture – maybe it would be best to forget our own languages and just write in English? Many are afraid that little languages (and therefore cultures) will become consumed by global ones and therefore become obsolete. However Madam Slapšak is an optimist – “I am sure that in the end, small languages will prevail… And in the distant future, when we sit in monasteries and in candlelight copy our books by hand, it would be swell that Humanists have a common language once more. My suggestion – study (ancient) Greek!”